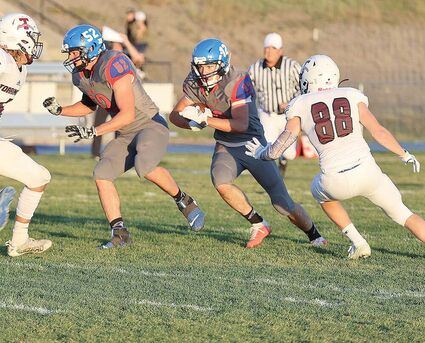 Levi Rudloff weaves his way through the Torrington defense.

The Patriot football team hosted the homecoming game in Upton Friday night as they took on the Torrington Trailblazers.

An exciting opening drive moved the Patriots down the field with big yardage gains, putting them in scoring territory after only a few minutes. Looking to get the right call on a third down, the Patriots called a timeout to get everyone on the same page.

Unfortunately, the Trailblazers sniffed out the reverse rollout and sacked Patriot quarterback Keaton Mills. Still in scoring range, the Patriots went for it on fourth down and Mills found Luca Brooks with a 19-yard reception for a Patriot touchdown. Levi Rudloff added an extra point and the Patriots struck first with 7 points on the board.

The Trailblazers were not stunned by the quick-moving Patriot offense and began throwing their way down the field. Before too long, quarterback Beau Bivens connected with Kieser Wolfe on a 49-yard reception bringing the Trailblazers into the end zone. A successful kick by Chase Miller tied the game 7-7 with 5:34 left in the first quarter.

The second quarter saw both team defenses stiffen, not allowing either offense to work too far down the field before having to punt it away. The Patriots came close to finding the end zone at the end of the half, making their way to the 15-yard line with 5.9 seconds left, but a shot into the endzone fell incomplete, sending the teams into the locker room with a tied game 7-7.

As the second half began, a kickoff out of bounds penalty was a bad omen for the Patriots, allowing the Trailblazer offense to start at the 35. The Trailblazers quickly pushed their way into field goal range as the opening minutes ticked away.

With 7:23 left in the clock, Chase Miller kicked a field goal for the Tailblazers putting them up 10-7. Down but not out, the Patriot offense took over and pushed their way down the field through the Trailblazer defense.

Facing a fourth and goal from the nine-yard line Keaton Mills connected with Luca Brooks on a successful corner route to put the Patriots back in the lead. With another extra point kick by Rudloff, the Patriots held a 14-10 lead with 2:45 remaining in the third quarter.

With time running short in the third quarter, the Trailblazers offense once again took to the air in hopes of moving down the field. A few short gains brought them close to midfield, but time was running low. Bivens then took matters into his own hands with a quarterback draw, running for 35 yards into the end zone. Another extra point for the Trailblazers put them back in the lead 17-14 as the third quarter drew to a close.

The start of the fourth quarter continued to neutralize the outstanding Patriot kick returners as the Trailblazer kickers sailed the ball into the end zone on their kickoffs, forcing the Patriots to start their offense at the 20-yard line. A struggle for yardage forced the Patriots into a turnover on downs and gave the Trailblazers good field position around their 40-yard line, which they used to their advantage.

The Patriots continued to fight throughout the rest of the fourth quarter. A Trailblazer fumble recovered by the Patriots gave them one more opportunity to score, however penalties plagued the Patriots and they were unable to regain the yardage lost. The Trailblazers then took over as the clock ran out, taking a 24-14 victory over the Patriots.

The Patriots move to a 2-2 record and will face the 3-2 Tongue River Eagles on Friday in Tongue River.