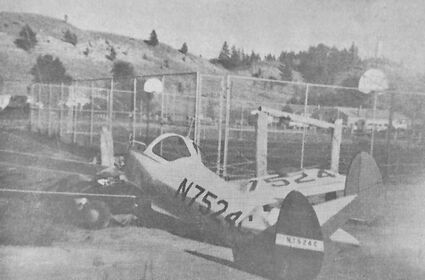 50 Years Ago, Sep. 2, 1971: Two men suffered injuries and this single-engine, two place Air coupe, owned by the Belle Fourche Flying Club, was destroyed when the aircraft crashed Saturday afternoon while taking off from a hay field north of the Hulett school. Injured in the crash were the pilot, Art Daknis and Walt Deknis, his brother. Both received cuts and bruises and were taken to the Belle Fourche hospital. Sheriff John Peterson, who investigated the crash with State Highway Patrolman Bill Wright, said the crash came about 1:20 p.m. and was witnessed by Roger Hayworth and Bob Steckman. Peterson said the aircraft gained about 200 feet of altitude after takeoff and then nosed down over a portion of the school building. It crashed in the school parking lot, coming to rest in the fence around the football field.

Joe Decker of Sundance who was knocked down by a stampeding horse at the fairgrounds Saturday afternoon received only minor injuries and is up and around, although still at the hospital. It was reported at first that he had been seriously injured.