Visitor numbers lower than expected on Wyoming side of the border 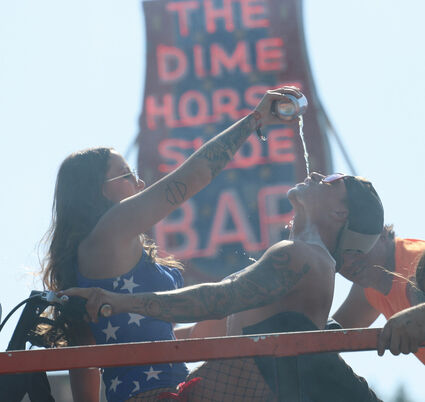 The burnouts are always the most popular part of Wyoming Wednesday in Sundance.

At least on this side of the border, the 81st Sturgis Motorcycle Rally didn't bring nearly the influx of two-wheeled visitors many had been expecting. Compared to the heyday of 20 years ago, says Sheriff Jeff Hodge, this year's Wyoming Wednesday was positively sedate.

"It sounds like [numbers] were up in Sturgis," he says, but this didn't seem to translate to the kind of hectic middle of the week Crook County usually experiences.

Numbers seemed to be down in both of the usual Wyoming Wednesday destinations, Hodge says: the burnouts in Sunday and the Ham n' Jam in Hulett. The streets of Sundance stayed relatively empty for most of the day, with crowd numbers finally starting to climb around 2:30 p.m. – several hours later than usual.

Ordinarily, when the Sundance event gets busy, the center lane of Cleveland St. will become one long parking space. The overflow also affects Main Street, with motorcycles spreading out down the center and on both sides.

But not this year. "There wasn't any of that," Hodge says.

Aladdin and Beulah were busy on Tuesday, Hodge says, because many bikers were heading for Alzada. For the last few years, says Emergency Management Coordinator Ed Robinson, the Montana town has been hosting "Topless Tuesday."

"It's started to pick up traction here in the last couple of years," says Hodge. Loud, crazy and something of a "free-for-all," he believes it's an enticing event for the fun-loving biker crowd. 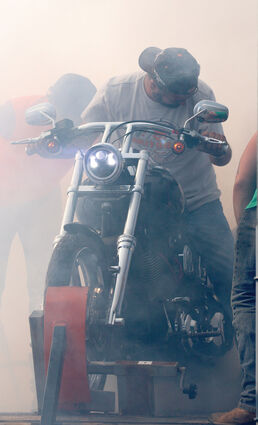 The burnouts are always the most popular part of Wyoming Wednesday in Sundance.

The sheriff suggests one possible reason for the lower numbers on what's usually the biggest day of the week is that bikers may have been stretching out their visits to Wyoming through the week of Rally so as to avoid the Wednesday traffic that sees thousands of motorcycles travel between Sundance to Hulett.

All of this led to a low-impact Rally week for Crook County.

"Compared to 20 years ago, the crowd is way better behaved and mellow. It's pretty calm," Hodge says.

Five total accidents were reported on Crook County highways through the week, says Hodge, none of which were fatal.

"The Sheriff's Office had one felony drug arrest and one DUI and those were the only arrests we know about," Hodge says.