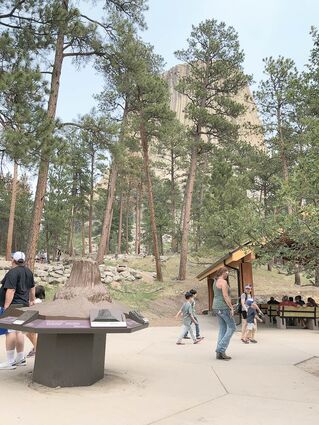 Some of the accessibility improvements at Devils Tower National Monument.

Major improvements to the accessibility of trails, exhibits, parking and restrooms were completed in July at Devils Tower National Monument. It is the first major upgrade to the park's infrastructure since the mid-1950s, when annual visitation was about 130,000 compared to about 500,000 now.

The project enhanced accessibility for visitors with disabilities and brought the park into compliance with federal accessibility laws and regulations. Superintendent Amnesty Kochanowski said, "We want all people to be able to experience the nation's first national monument. The design team employed universal design principles which maximizes usability for everyone."

A new accessible route from the visitor center area to the base of the Tower was built, including three plazas and an overlook, a pavilion and a bus drop-off. Large vehicle parking was extended, existing restrooms upgraded and an accessible vault toilet was added.

Exhibits in the visitor center and signs along the Tower Trail were also redesigned as part of the $5.2 million project. The majority of the project was funded with entrance and campground fees.

Featured are captioned and audio described films, and tactile maps and models for visitors who are deaf and/or blind, among other users. The accessible exhibits and signs were designed in collaboration with the National Center on Accessibility at Indiana University. Key stakeholders were consulted throughout the project, including people with disabilities, tribal leaders and the local business community.

Kochanowski said it was a challenging and worthy project: "After nearly a decade of planning, project execution ran into delays throughout the past year and a half. We thank the community and visitors for their patience during construction. Ultimately, the objective of the project was achieved! Park staff and I are grateful to be able to share this special place with all people."

In addition to the dramatic improvements in accessibility, the project corrected $1.4 million of the park's $6 million in deferred maintenance.

Devils Tower National Monument was one of several national park units chosen by the NPS to undergo comprehensive accessibility improvements through the landmark Targeted Accessibility Improvement Program. The program originated under the NPS All In! five-year accessibility initiative to ensure that all visitors are afforded access to our nation's significant sites and the stories within.

Michael Whiteman-Jones, NPS Regional Accessibility Coordinator, said, "This accessibility project is a standout model for the National Park Service. A hard-won major accomplishment for the park-not to mention the local community, state and people with disabilities everywhere-can all be proud of and enjoy."