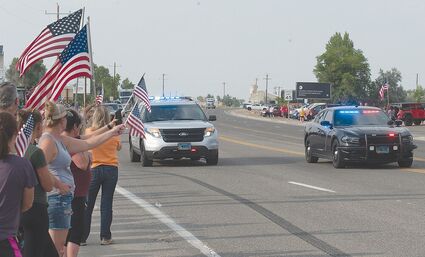 Worland residents line up to watch the procession bringing the remains of 1st Lt. Alva Ray Krogman to his hometown of Worland on Monday. Krogman, a member of the U.S. Air Force, was lost over Laos in 1967 and his remains were recently returned to the United States. After being flown to Billings, Montana, on Monday, the remains were brought to Worland by the Wyoming Patriot Guard Riders and escorted by law enforcement officers from each community they passed through. Services for Krogman were held Tuesday, which was named Alva R. Krogman Day in Worland.