The Gray family is celebrating the life of loving father, grandfather and great grandfather Richard Gray. Obituary is below with service information.

Richard Gray passed away Saturday, July 3, 2021 at the Weston County Manor. The family is very appreciative of the loving care the staff provided him for the last several years. He called it home and was always happy to return after a day touring the highways of Crook, Campbell and Weston counties.

Richard was born at home to Oneal and Lula Gray near Rozet on August 13, 1925 with a midwife attending. When the doctor from Moorcroft arrived, he was already born. The doctor signed the birth certificate, had a beer with Oneal and returned to Moorcroft.

Richard grew up with his sister Dottie and brother Alvin on the homestead off Miller Creek Road (Gray Road). He attended 12 years of school in Rozet, graduating in 1943.

His proudest achievement was the Rozet basketball team winning second place in the Wyoming State tournament. The family never tired of the stories of the team. During that time, he met the love of his life, Betty Macy, who was a cheerleader for Moorcroft High.

Richard joined the Navy in August 1943 to be a part of the war effort. He was involved in many of the landings on South Pacific islands including Iwo Jima. He saw the flag raised on Mt. Suribachi.

Immediately upon returning from the war, he married Betty on March 3, 1946. They moved to Laramie for him to attend the University of Wyoming where he received a bachelor’s degree in agriculture.

They moved to the ranch south of Moorcroft where Betty had grown up. He was recruited to join the Soil Conservation Service, where he worked for 27 years and managed the ranch with Betty. At age 55, he retired and worked full time with Betty to apply dry land ranching techniques. 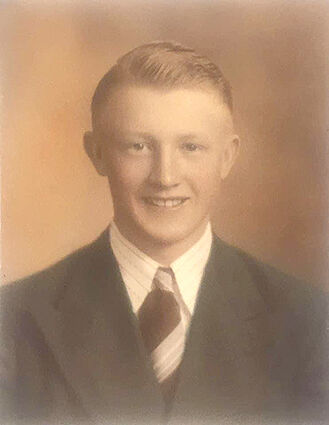 Richard and Betty dedicated their lives to their family, grandchildren and serving the youth of Moorcroft. They served as church youth leaders, boy scout leaders, 4-H leaders and members of the Crook County School Board. Those efforts left an impact on many of us.

Richard lost his partner and only love Betty on April 1, 2012. He continued to remind us she was “a good girl”. He is survived by his four sons, Rick, Neal (Dee), Rod (Linda) and Thayne (Shone). Richard has 14 grandchildren, 17 great grandchildren and one great great grandchild.

A memorial service will be held at the Moorcroft Town Center Auditorium at 4 p.m. on Thursday, July 8, 2021. Memorials may be contributed to the youth Logos program in Moorcroft.