This Side of the Pond

Notes from an Uprooted Englishwoman 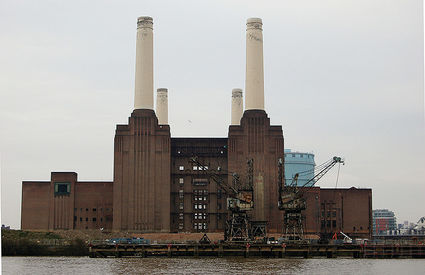 If I had to name an equivalent to Old Stoney from back in my homeland, my mind would instantly go to Battersea Power Station. I’ve spent a lifetime waiting for someone to breathe new life into the iconic London landmark, and finally my patience has been rewarded.

Looming over the River Thames along my daily commute to work, the station is one of the biggest brick buildings in the world and once consumed over a million tons of coal each year to provide a fifth of London’s electricity. Unfortunately, it got expensive to run and output began to fall as it aged.

It being an industrial power station, you’d have thought that would be that once it finally closed – but it was only the beginning of the saga. When the whispers began that closure was imminent, a campaign was launched to save it as part of the national heritage.

It worked, and the building was given listed status to recognize its Art Deco interior and décor that includes Italian marble in the turbine hall and polished parquet floors with wrought-iron staircases.

Pretty fancy for a power station, although I can’t put my finger on why it became such a popular landmark. From the outside, it’s just a huge brick building with four chimneys, but it was loved from the moment it went up in the 1930s – it was even ranked equal to St. Paul’s Cathedral as a landmark at the time and described, somewhat whimsically, as a “temple of power.”

When it closed, the Central Electricity Generating Board was stuck paying the costs of preserving a bloody great empty building and decided to hold a contest for ideas on redeveloping it. The winner proposed an indoor theme park, which was supposed to cost £35 million but was put on hold in 1989 when the costs somehow skyrocketed to £230 million. Gold-plated rollercoasters, I assume.

It’s changed hands many times since then, with owners and proposed buyers ranging from the Bank of America to giant football club Chelsea and even Apple. Ideas to give it new life ranged from a soccer stadium to a biomass power station and “eco-dome” to an employee campus.

Everything failed miserably until it was finally purchased by SP Setia in 2012 and renamed, imaginatively, “The Power Station.” Work began right away to redevelop the site into shops, cafes, cultural venues and apartments to house 25,000 people, complete with garden area on the roof and office district.

It’s a £9 billion project across eight phases covering 42 acres. At the end of May, the first residents were handed their keys in a ceremony that included a light display and music from the London Symphony Orchestra. It’s a big deal, for those of us who’ve been waiting all these years with bated breath.

If the power station seems strangely familiar, it might be because pop culture was partly responsible for saving Battersea’s bacon. What made the huge building iconic was not just its tendency to dominate the skyline, but its constant appearances in the kind of media that still attracts affection today.

You’ll find it in the booklet art of The Who’s “Quadrophenia,” for example, and on the cover of Pink Floyd’s “Animals” with an inflatable pig floating around in front of it. (Apparently, the photoshoot went wrong when Algie the balloon pig escaped his moorings and wandered into the flight path at Heathrow Airport – fortunately, he eventually landed all by himself over in Kent.)

The Jam shot the video for “News of the World” on the roof, while Tori Amos filmed for “Talula” inside. Hanson featured it in the video for “Where’s the Love” and Drake used its image behind the credits of “Nice for What.”

You’ll also see it constantly on small and silver screens – it forms the backdrop for the opening scene of Alfred Hitchcock’s “Sabotage,” and it’s in “Help!” by The Beatles. It turned up in “Superman III” (although they lied and said it was an American coal mining operation), an episode of “MacGuyver” (they again lied and said it was an Eastern European military camp) and in Batman movie “The Dark Knight” (once again with some fibbing involved to pretend it was a burnt out warehouse.)

If you happen to be a fan of Monty Python, you might even recognize it from the “Find the Fish” segment of “The Meaning of Life.”

However, the real reason Battersea Power Station was special to me as a child is that I was not particularly bright. My hometown had its own coal-fired power station, and it looked similar to London’s behemoth (as long as you didn’t look too closely at the brickwork or count the chimneys.)

Battersea was constantly on the news when people began trying to repurpose it but, in my little mind, I was looking at the power station you could almost see from my grandparents’ living room window.

Ours only had two chimneys and was much smaller, but its 325-foot chimneys still made it the tallest building in the county. I surely must have noticed the differences, but I guess I assumed they were filming Battersea from funny angles as it never occurred to me that it might not be the same place.

Imagine my surprise, then, when I’d been hearing about all these renovation attempts, only for my grandparents to switch on the news one day to witness the momentous occasion of the Poole Power Station being demolished. The chimneys came down with an almighty crash, and that was very much that.

I bet the town council is kicking itself right now – we could have fitted at least a couple of grocery stores and a hairdresser inside that thing.