Peggy Charlene Shaul McAmis of Alva, Wyoming, peacefully entered the presence of her Lord and Savior Jesus Christ on May 14, 2021.

Peggy was born February 25, 1932, to Charlie and Esther (Anderson) Shaul, she lived her entire life on the family ranch near Alva. Peggy attended Belle Fourche High School, graduating on May 20, 1949. She earned a teaching credential from Black Hills State University, Spearfish, South Dakota and taught school in Alva.

On June 24, 1950, Peggy married Bruce Langdon McAmis. She passed from this life one month and ten days prior to their 71st wedding anniversary. Their exemplary marriage, strength of character and Christian faith formed a lasting legacy for their family.

Peggy was known and loved by many. Devotion to her faith and family were deeply ingrained character traits. 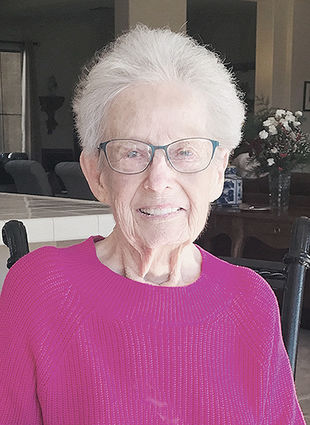 As a young wife and mom, she began a long and enjoyable association with Beavercreek Homemakers Club and membership at First Baptist Church, Hulett, Wyoming, where she taught Sunday School and summer Bible School classes. Generous and warm hospitality was a hallmark of the McAmis home, enjoyed often by her extended family, friends and neighbors.

She was preceded in death by her parents Charlie and Esther Shaul and her husband’s parents, Carp and Libby McAmis.

A Celebration of Peggy’s Life will be held Saturday May 22, 2021, at 10 a.m. at the Greater Hulett Community Center, Hulett, with Reverend Jim Palus officiating. She will be laid to rest at the Alva Cemetery.

A memorial has been established to benefit First Baptist Church, Hulett.

Online condolences may be written at ww.fidler-isburgfuneralchapels.com