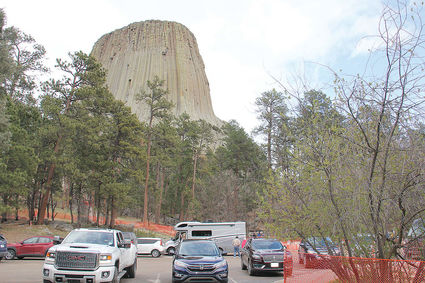 Devils Tower National Monument has announced that the Belle Fourche River Campground and picnic area will be opening on May 15. Cook Lake will also be opening for both camping and day use on May 14.

Popular recreation spot Cook Lake has seen its season interrupted several times over the past few years, first by concern over a potential landslide hanging over the lake and then to allow for planned construction of a new dam. This year, however, it will remain open “all season long for the first time in two years,” says District Ranger Mike Gosse.

The 2021 summer season is set to be a busy one. Cook Lake Recreation Area has 32 camp sites and, according to Gosse, 60% of these sites have already been reserved for most of the summer.

Cliff Swallow Trail and the campground will both open on May 14, with an FRM campground host on site. Landslide monitoring will continue on the west side of the lake, which will remain closed to the public.

The lake itself was stocked with 8000 fish last spring and a new kayak and canoe launch area is available for use on the south side. Visit recreation.gov to reserve a campsite within the Black Hills National Forest.

Meanwhile, according to a press release, Devils Tower experienced the busiest fall and winter season on record and visitation is continuing to climb. Between September and April, visits were reportedly 46% above the five-year average – nearly 50,000 extra visitors.

This trend is expected to continue, as are the modified operations based on future conditions and public health guidance. Face coverings are required at this time in all park buildings and facilities, as well as in outdoor locations such as trails and parking lots if physical distancing cannot be maintained.

Visitors should also be aware that work on a physical accessibility construction project is ongoing at the visitor center, Tower Trail, restroom, parking and parking lot walkways and caution should be used in this area. Some climbing routes are also still temporarily closed due to nesting falcons and the voluntary climbing closure will run from June 1 until June 30.

Winter closure signs have now also been removed on Forest roads, says Gosse. The decision was made to do so because the roads are in good shape and due to the lack of snow that has fallen in this area over recent weeks.

Black Hills National Forest campgrounds are now scheduled to open May 14 and seasonal gates on May 15.