Elaine Gertrude (Sorensen) Clark was born on Sunday, January 7, 1923, in Ravinia, South Dakota, but her birth certificate says Wagner, South Dakota. She passed away Saturday, April 17, 2021, at Crook County Medical Services in Sundance, Wyoming, at the age of 98.

Her parents were Robert William Sorensen and Sarah Ann (Bellon) Sorensen. As a young child she lived in Arpan, South Dakota and Lead, South Dakota, where her father worked at the Homestake Gold Mine.

She graduated eighth grade from the Ransom Country School and then went to Sundance High School. She stayed in town during the week and with her parents over the weekends. But, by the time she was a sophomore there was a school bus route and she was able to live with them at the family’s home.

She met Straitor Clark at a barn dance near Sundance. Their courtship began and they wrote letters and went to barn dances for four years.

After Elaine graduated from high school, she and Straitor eloped in Deadwood, South Dakota and were married on June 14, 1941. They lived on the Banks Place, where Straitor was working.

By this time, they were renting and running the ranch and raised cattle and sheep. They also had numerous horses. Larry Dean was adopted when he was three years old. He was born August 17, 1961.

Straitor and Elaine lived a full life on the ranch, at one point having seven milk cows. Elaine sold milk, cream, and eggs in town twice a week. Over the years she raised many bum lambs.

In 1970, they lost the lease to the ranch and had a large auction; they sold all the livestock and equipment and then moved to Sundance. Elaine worked at Durfee’s Department Store, the Bearlodge Motel as a maid and as a janitor with Straitor for Tri-County Electric. Over the years, Elaine also wrote a column for the Sundance Times newspaper.

After retiring, she enjoyed working in her lovely flower beds, sewing clothes for grandkids and baking delicious food. She loved animals and held great fondness for her dogs over her lifetime, especially Lucky and Abby. She also was an avid reader and thoroughly loved doing crossword puzzles.

In 2003, Straitor moved to the Long-Term Health Care in Sundance where he lived for five years. Elaine spent time with and assisted with care for him for multiple hours of each day. He passed November 10, 2008.

She remained in their home until 2013, when she moved to Green Mountain Estates Apartments. In the summer of 2020, she entered the Crook County Medical Services Long Term Care Facility and was there until her passing.

Elaine was a member of the Episcopal Church of the Good Shepherd, the Daughters of the King, a 65-year member, Past Worthy Matron of Electa Chapter #5 and Past Grand Warder of Grand Chapter of Wyoming, Order of the Eastern Star, a member of Sahida Temple Daughters of the Nile, Past Guardian of Bethel #26 at Upton and #43 at Sundance, International Order of Job’s Daughters, a 4H Leader for multiple years for the Kara Kats and the Kara Mountain Kids 4H Clubs, was a FFA Chapter Mom and was named the Sundance Masonic Lodge Mother of the Year in 2015.

She was preceded in death by her husband, Straitor; her parents, Robert and Sarah (Bellon) Sorensen; her siblings, Robert “Bud” Sorensen and her sister, Doris Fuller; her son, James “Jim” Clark; her daughter, Judy Grof; and two grandchildren, Clark Nicholas and Elizabeth Grof. 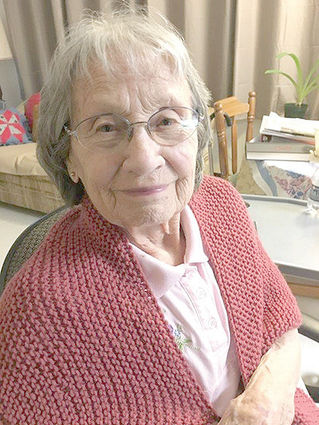 Funeral Services will be held on Saturday, April 24, 2021, at 2 p.m. at the Episcopal Church of the Good Shepherd in Sundance with the Rev. JoAnne Moore and Deacon Annmarie Delgado presiding. The church is mandating mask requirements and social distancing. Burial will take place at Green Mountain Cemetery with fellowship to follow at the Sundance State Bank Hospitality Room adjacent to the post office.

Memorials may be given to the Episcopal Church of the Good Shepherd, The Inyan Kara Shrine Club Helping Hand Fund or Crook County Senior Services.