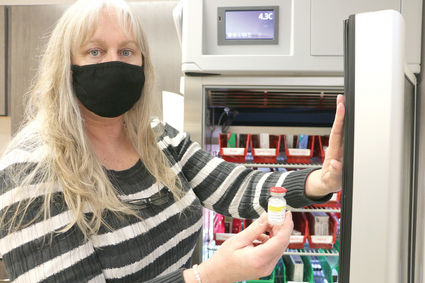 With restrictions on timing, dose numbers, eligible candidates and more, it’s quite the logistical challenge to roll out a COVID-19 vaccination program. That’s why it’s not yet possible to host walk-in clinics, says Public Health Nurse Carol Stutzman.

For the time being, Crook County Public Health has devised a strategy to vaccinate citizens according to level of priority and available doses.

“Because of the priority phases and the restriction of having to use all ten doses in the vial within six hours, we can’t have a walk-in clinic yet. That’s why we decided to make the list of names, broken down by town, because then we can schedule it,” says Melanie Wilmer, Public Information Officer.

Public Health is still calling for anyone interested in receiving the COVID-19 vaccine to contact the office to be placed on the waiting list, regardless of how high you fall on the priority list. You will be contacted when your tier has been announced and a dose is available for you.

At the moment, Crook County is receiving 100 doses of the Moderna vaccine each week. Once a batch of vaccines has arrived, candidates on the waiting list are contacted in groups of ten, cycling through the municipalities to ensure the vaccine is being distributed fairly.

Appointments are set up just a short time beforehand. The timing is intentional, says Katie Allen, who has been tasked with maintaining the database of vaccine candidates.

“If we have a huge storm and nothing makes it through for the rest of the week, then we’re having to call 50 people to say we’ll have to call them again when we know we have the vaccine,” explains Katie Allen, “We like to physically have the vaccine and then schedule it.”

If one or more people on the list has to cancel their appointment, Public Health then contacts another eligible person on the list to ask them to come to the clinic immediately to ensure no doses are wasted.

The recommendation is for the second dose of the Moderna vaccine to be administered 28 days after the first, but Stutzman would like to reassure candidates that there’s no need to turn down your first dose because you may not be available for the second on precisely the 28th day.

“There is a minimum interval, meaning you cannot get it before day 28, but there is no maximum interval,” she says. “It’s just you won’t have your full immunity until you get that second dose.”

Around 500 people are currently on the waiting list for either their first or second dose, ranging in age from 19 to 97 and from no health issues to severe issues. To be placed on the waiting list, call Public Health and provide a few simple details, such as age and contact information.

The staff of Public Health politely ask that, once you are on the waiting list, you wait for a call to let you know a vaccine is available for you. Because Public Health has only a few staff members, fielding calls from people who would like to know when their vaccine will be available could serve to gum up the system and slow down efforts to roll out the vaccine.

Stutzman would also like candidates to be aware that, when Public Health calls, the office number comes up as “private.” If you don’t answer, a message will be left for you.

When calling to be placed on the waiting list, please be aware that all staff members may be busy at that time. Please leave a message and your call will be returned.

According to guidelines from the Wyoming Department of Health, the vaccine is being administered in order of priority. The first phase included healthcare workers on the front lines, for example, while the second includes people over the age of 70.

“There is a very defined list of who can have it, but we are able to play a little bit within the priorities,” says Stutzman. For example, people over 70 are higher on the phase 1b list than funeral home employees, but Public Health has the flexibility to schedule the latter group among the former.

That helps, Stutzman says, because the over-70 group is enormous compared to the number of people working in, for example, behavioral health. Approximately 1800 people fall into the over-70s category in Crook County, so the other phase 1b categories would otherwise be waiting a long time for their turn.

“With our population density, we were much more flexible here than our larger-population counties,” says Wilmer. Some counties are still working their way through phase 1a, so being a small county is working in our favor.

“We’re very pleased with the amount of people that want it,” says Wilmer.

The doses Crook County receives each week can easily be administered with the staff available.

“We have one nurse and a part-time nurse taking care of this,” says Wilmer. “One hundred doses a week we can handle.”

Once the second doses start arriving on the week of February 8, however, the workload will double. At that point, says Stutzman, one nurse will handle the first doses and the other will focus on second doses, but Public Health does not expect the program to slow down.

“We won’t stall, we will continue progress,” she says.

No matter a person’s reason for wanting to do so, it’s not possible to skip the line and receive a vaccination before your priority phase has been announced.

Once Public Health has completed the majority of the phase 1b category, and with the blessing of the Wyoming Department of Health, the next priority groups will take their turns. Until then, the vaccine is restricted to only persons who fall into phase 1a or 1b categories.

Phase 1c is expected to include employees in industries including food service, energy, law and transportation. The list will be devised and recommended by the Centers for Disease Control, says Wilmer, “but the Department of Health has to tailor it for Wyoming.”

It also does not matter which phase the county is currently working on, says Stutzman, candidates will still be prioritized according to their tier. If, for example, a person over the age of 70 decides they would like to be vaccinated during phase 1c, they will be given a higher priority than candidates in phase 1c categories.

“If someone misses their tier, they can call and still get on the list,” she stresses. “It’s not that you missed the boat, you just need to call and we will schedule you appropriately.”

Stutzman clarifies that the waiting time does not mean anyone who wants a vaccine will be forgotten.

“There will be enough vaccine for everyone in the country,” she says.

Side effects from the vaccine are still proving to be mild for most people and tend to include such things as a sore arm and tiredness. In most cases, they last around a day.

“It’s actually a good thing. That is your immune system responding to the vaccine,” says Wilmer.

Some people do not experience visible side effects at all, says Stutzman, and that’s ok too. The vaccine is still working and the body is still learning the right lessons.

The vaccine itself does not contain the COVID-19 virus in any form, just the blueprint for a protein unique to it. Though side effects may mimic some of the symptoms you might experience if you became infected with the coronavirus, Stutzman says, it is not possible for the vaccine to actually give you COVID-19.

The vaccine cannot be administered within two weeks of a different kind of vaccine. Public Health would like to know if you have ever experienced an allergic reaction to any medicine or medical procedure, as these candidates are asked to remain in the building for 30 minutes after receiving the vaccine to be on the safe side.

Of the 390 first doses so far administered in Crook County, no severe allergic reactions have occurred.

When Public Health is able to receive larger batches of vaccine and has also been provided with guidance on the next priority phases, it will become possible to start holding walk-in clinics, says Wilmer.

In the meantime, more information is almost certain to emerge as time goes by about such things as the vaccine’s effectiveness and how long it lasts, says Stutzman – and that’s what’s supposed to happen. Across the world, we are all learning as we go along and making the best use possible of the information as it updates.

“This is all still very new, it’s still under emergency authorization use, and because there hasn’t been enough time that has lapsed, we’re still gathering data as we go. Nobody will know for sure where the ball is going to end up bouncing and falling until more time has passed,” Stutzman says. 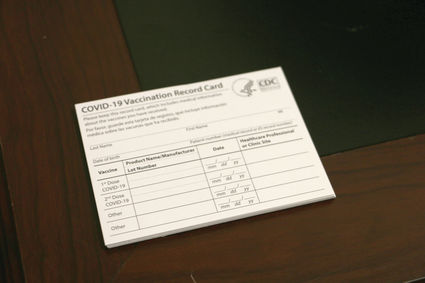 “The process is ever-evolving and we will get to a point where how we operate even in delivering our vaccine in little clinics in the different towns may change,” says Stutzman. For now, however, Public Health is doing the best it can with the tools and knowledge available, and will continue to keep rolling out the doses to candidates across the county.

Stutzman would like to thank the citizens of this county for the patience, support and understanding they have shown as Public Health works to get the vaccine rollout up to speed. “The county has been amazing,” she says.