Bulldogs get back on the hardwood, notch three wins 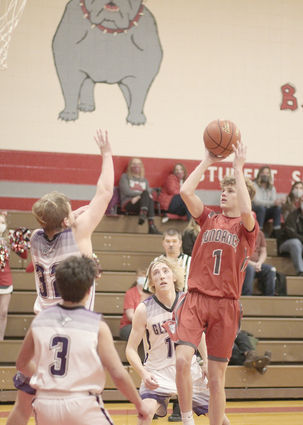 After a long winter break the Sundance boys basketball team was back on the floor with a busy weekend. Adding three more victories to their record, the Bulldogs were able to overcome the Newell Irrigators, Pine Bluffs Hornets and Glenrock Herders.

It was senior night on Thursday as the Sundance Bulldogs hosted the Newell Irrigators. “They’re such a great group of guys, they’ve done a great job helping to build the culture of unselfishness and hard work,” Coach Olson stated of his seniors.

Picking up right where they left off before the winter break, senior Brad Kruger helped the Bulldogs jump out to a 14-0 lead, draining three threes in the opening minutes of the game. Sundance proceeded to push the ball and control the tempo throughout the first half, giving them a commanding 46-16 lead.

The second half continued to see the Bulldogs dominate the court as three seniors found their way into double digit scoring. Landon Martin topped the scoring chart with 15 points, followed by fellow seniors Brad Kruger and Lane Gill who contributed 14 points each in the 70-34 victory over Newell.

Friday afternoon the Bulldogs were back in action, hosting the Sundance quad. In a structure much like the state tournament will look, the Bulldogs played two games in one day.

It was an unusually slow start for the Bulldogs against Pine Bluffs as the Hornets came out with a tough defense, causing the Bulldogs some turnovers early on. Halfway through the first quarter Lane Gill knocked the cover off the basket for the Bulldogs, sinking a pair of free throws and putting the first points on the board.

A quick timeout called by the Hornets allowed the Bulldogs to set up their aggressive full court press and force some timely turnovers. Shortly thereafter it was Gill once again from behind the arc, nailing his first of five threes for the game, giving the Bulldogs the offensive momentum they were looking for.

The second quarter saw the Bulldogs lead increasing as Kruger and Gill continued to sink their shots from behind the arc. With time ticking away in the first half of play, a once-in-a-lifetime shot appeared as senior Lane Gill got the ball at the freethrow line and threw it towards the opposite end of the floor, sinking the shot just as time ran out on the half. With the crowd on their feet, the Bulldogs left the floor with a 39-19 lead.

Landon Martin paced the team in the second half, scoring 12 points as the Bulldogs continued to control the momentum of the game. The Hornets mounted a slight comeback within the half, but it was too late and the Bulldogs walked off the floor with the 65-46 victory.

Game two on Friday Night opened up in a tight match as the Glenrock Herders and Sundance Bulldogs matched basket for basket throughout the first quarter. The physical play between the two teams made each side work hard for any basket they could get and after eight minutes of play the Bulldogs had a slight advantage, 14-12. The second quarter found the Bulldogs getting into their run and gun rhythm as they outscored the Herders 19-2, upping the score 33-14 going into the break.

The Bulldogs extended their lead in the second half with four players reaching double digits for scoring. Pair that with 20 steals on the night for the Bulldogs and they were easily able to run away with a 63-31 victory.

The Sundance boys basketball team will take a week off from competition this week and prepare for their next home game against the Wright Panthers on January 22 and the Big Horn Rams on the 23rd.

The Sundance girls’ basketball team split their double header this weekend with a five-point loss to Pine Bluffs and a 33-point victory over Glenrock.

Opening up play in a tight match against Pine Bluffs, the Lady Bulldogs kept the score close throughout the first quarter. With a 6-0 run to start the second quarter, Sundance surged to a 13-9 lead and Pine Bluffs needed a timeout to slow the Bulldog momentum. Shortly thereafter, the Hornets found their rhythm and took the 23-17 lead into the break.

The second half found the Bulldogs chipping away at the Hornets lead. Switching to a man-to-man defense and putting a little full court pressure on the Hornets, the Bulldogs found the defensive nudge they were looking for to get the ball moving in their direction.

A steal and back-to-back baskets by Sherry Negaard to open the half increased the score for the Bulldogs and tied the game at 23. Jaden Shelit, however, continued to work her way towards the basket for Pine Bluffs allowing them to take a 32-25 lead at the end of the third.

The fourth quarter saw the Hornets begin to pull away but the defensive effort by the Bulldogs kept the score close. Leading the Bulldogs 37-31 with two minutes remaining in the game, the Hornets slowed down their offense hoping to get a better look at the basket and maintain their lead.

The Bulldog defense was forced to step up their game in order to regain control of the ball and close the gap. Although the Bulldogs were within three points with 3.5 seconds remaining, a pair of free throws made by Shelit sealed the 39-34 victory for the Pine Bluffs Hornets.

The Lady Bulldogs could not dwell on their close loss for too long as game two of their double header brought the Glenrock Herders to the court next. Looking to build off of their defensive momentum at the end of game one, the Lady Bulldogs started game two with a vengeance.

Holding the Herders to 10 points in the first half, the Lady Bulldogs used their defensive momentum to fuel their offense.

“We have been playing really good defense,” Coach Randi Faeth stated, “Our turnovers were down this weekend so they weren’t getting as many easy points. We just needed to keep shooting the ball.” The Lady Bulldogs went into halftime with a 25-10 lead over the Lady Herders.

Bailey Hofland led the way in scoring for the Bulldogs throughout the second half. Finding the open shot underneath or grabbing the rebound for a quick putback, she ended the night with a team high of 15 points and 13 rebounds. Sister Brook Hofland helped to control the boards for the Bulldogs pulling down eight rebounds on the night while teammate Lexie Marchant followed suit with 10 points and six rebounds. The Lady Bulldogs continued to turn a great defensive effort into offensive points throughout the second half and walked away with the 50-17 victory.

The Lady Bulldogs have a light week this week as they host the Harding County Ranchers on Thursday night. Tip off will begin with the JV at 5 p.m. followed by the varsity. 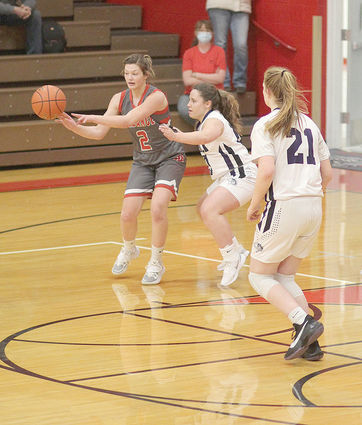