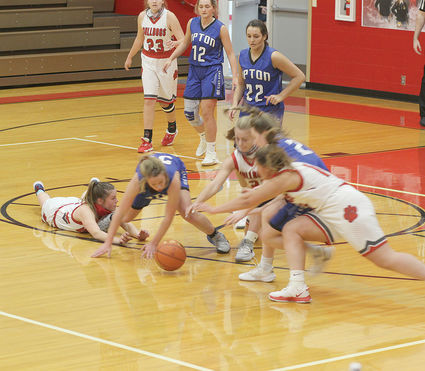 The Sundance Girls basketball team took to the court Saturday for the opening game of the 2020-21 season. Up against the ever-quick Upton Lady Cats, the Lady Bulldogs kept the score close in the first half of play.

Going into the break down by five, 10-15, the Lady Bulldogs were looking for a momentum change to start the second half. A change in defense and personnel helped the Lady Bulldogs pick up their intensity on the floor and get some good looks at the basket.

Unfortunately those looks would not fall for the Bulldogs and it seemed as though the Lady Cats could not miss. Scoring only seven points in the third quarter the Lady Bulldogs found themselves down 17-35 with eight minutes remaining.

Senior Sherry Negaard opened up the fourth quarter draining a three for the Bulldogs, pulling them within 15, however the Lady Cats continued to sink their shots from the floor, draining three threes of their own throughout the fourth quarter and taking the 49-26 victory.

Cana McInerney led the Bulldogs in scoring for the night with seven points, while Sherry Negaard led the Lady Bulldogs on the boards pulling down eight rebounds for the night.

The Lady Bulldogs have a busy weekend traveling to Newcastle to face the Dogies on Thursday and hosting the Belle Fourche Broncs and the Diggers from Lead/Deadwood on Friday and Saturday. Play will begin at 5 p.m. on Friday and 11 a.m. on Saturday.

The Sundance Boys basketball team hit the hardwood running in their opening game of the season against the Upton Bobcats on Saturday. In a fast-paced first half, the Bulldogs jumped out to a 45-32 lead.

Seniors Landon Martin and Lane Gill each found their rhythm from behind the arc, sinking three three-pointers a piece in the opening 16 minutes of play.

The Upton Bobcats came out of the break with some changes up their sleeve. An adjustment on the offensive and defensive end allowed the Bobcats to close the gap to seven, 53-60, by the end of the third quarter.

“Coach Samuelson made some grade adjustments that we didn’t react to very well,” head coach Nic Olson states. “We also got lazy defensively and left a lot of open shots for them.”

Scoring just six points in the final quarter of play, the Bulldogs could not hold onto their lead and the Bobcats walked away with a 71-66 victory.

Despite the loss, coach Olson believes the Bulldogs will have a pretty solid season.

“We have a veteran group with a lot of varsity experience and leadership for the younger guys to look up to. They put in a ton of work throughout the off season and it shows with how they’re practicing and playing,” he says.

“It will be an interesting year playing with such a small group of fans in the stands, we are going to have to bring our energy with us to every game home and away.”

The Bulldogs will go into the holiday break with three games this weekend as they travel to Newcastle on Thursday night to face the Dogies at 7 p.m. Friday and Saturday they will host Belle Fourche and Lead/Deadwood. Play will begin at 5 p.m. Friday night and 11 a.m. on Saturday. 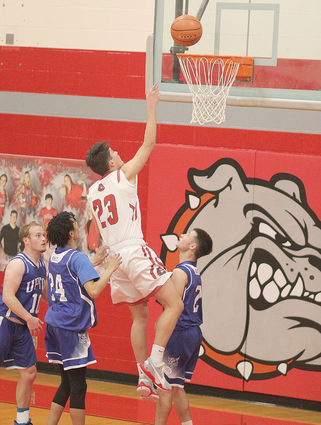