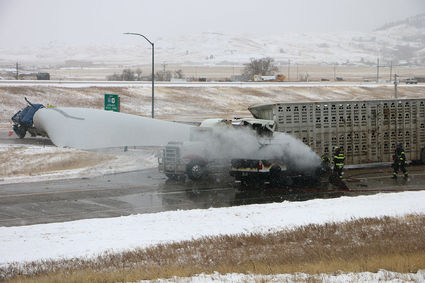 A serious crash took place on Wednesday morning at around 11 a.m. in Sundance involving a semi hauling a large wind turbine blade, which was was rounding the corner into the Port of Entry at the time of the incident. Also involved were a pilot vehicle and a semi hauling a cattle trailer. 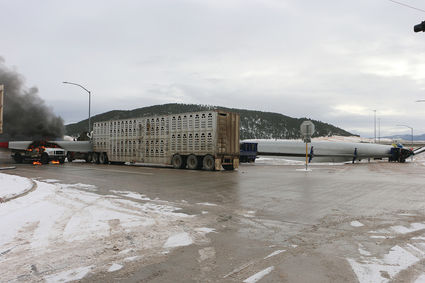 The collision caused the blade to impact with both the cattle trailer and the cab of the pilot vehicle. The pilot vehicle caught fire and was engulfed. The semi hauling the blade was also overturned.

Sundance Fire Department, EMS, Wyoming Highway Patrol and the Crook County Sheriff’s Office were among those agencies that responded to the incident. No injuries had been reported at time of publishing this report.

As of late Wednesday afternoon, the area remained closed off and clean-up was ongoing.

Full details of the incident will be available in your next issue of the Sundance Times.