Minta Eileen (Tate) Gray was born November 24, 1934, to Merrill and Norine Violet (McDougall) Tate in Riverton, Wyoming. Minta was the first daughter in the family, where she joined three brothers, Ronnie, Cecil and Duane, later to be joined by the youngest member, Sharon.

The family lived in Chugwater, Wheatland and Riverton, before settling in Newcastle. Here Minta attended school and met the man who become her partner in life for 67 years, Earl Gray.

Minta and Earl were married November 28, 1952 in Newcastle, Wyoming. They made their home there until moving to Spearfish, South Dakota, where Earl attended BHTC.

After graduation they moved to Moorcroft, Wyoming then to Douglas, Wyoming, where Earl taught school and Minta was busy being a mom to three children. After leaving Douglas, Minta helped Earl operate the Castle Conoco Service Station in Newcastle.

During this time, a fourth child rounded out the family. Minta also helped her mom out by working at the restaurant/café that she owned.

In 1967, Minta and Earl and family moved to Sundance, where they would spend the next 67 years. During the years in Sundance, Minta would attend football, volleyball, basketball and wrestling matches. Always supporting her family, she helped with homework and school projects when needed.

Minta helped with the yearly Christmas decorating of their house, both inside and out. Many hours painting the all the yard decorations helped make for a delightful display on the Grays’ front yard.

The Christmas tree in the front window was a spectacular sight to behold and many, many times people driving by would stop and knock on the door to see if they could come in and see it close up. She always put the silver icicles on one or two at a time until the tree shimmered. Her Christmas baking and especially the peanut butter fudge were always family favorites.

Minta loved reading and you could always find a book or two or three opened to begin reading exactly where she left off earlier. In addition to reading, Minta also loved gardening, as you could easily tell by the magnificent vegetable and flower gardens surrounding the Grays’ house on the corner.

She also liked to crochet, embroidery and cross-stitch and her baking and cooking were truly wonderful. She could walk into a kitchen and come out with a meal fit for a king at a moment’s notice. She always said, “if you leave the table hungry, it’s your own fault”.

One of the best memories of grandkids and great-grandkids was and always will be the “cookie drawer”. It must have been magical, because it was never empty. No matter when it was opened, it always had your favorite kind of cookie in it just waiting for you. Her table was always full and the magical cookie drawer was never empty. 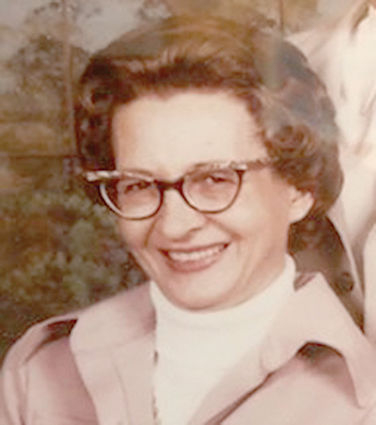 Due to COVID-19, a graveside service was held November 20, 2020, at Greenwood Cemetery in Newcastle, Wyoming. In lieu of flowers, send any memorials/or cards to Deb Kipp, 802 Vivian Court, Gillette, WY 82718.