The Upton-Sundance Patriots added another win to their column this past week as they dominated the Glenrock Herders in a 61-8 victory.

Opening up the game on defense, the Patriots wasted no time in shutting down the Herders’ quick pitch offense, forcing a turnover on downs on the opening drive. The Patriot offense then took to the field and wasted no time working their way down and into the end zone on a six-yard run from Jess Claycomb

A successful extra point kick by Brayden Bruce put the Patriots on the board, 7-0, only four minutes into the game. The Herders then muffed the ensuing kickoff and the Patriot offense was right back on the field and into the end zone for another quick score.

Setting the tone for the night, the Herders struggled against the swarming Patriot defense as they continued to turn the ball over on downs. The Patriot offense, however, continued to take advantage of the great field position given to them by their hardworking defense and questionable play calling by the Herders.

Scoring one more time before the quarter was done, the Patriots went into the 2nd up 21-0.

The disappointment continued for the Herders at the opening of the second quarter when the chains came out and they were just short of a first down once again. Back on the field, the Patriot offense kept the ball on the ground as they worked their way down the field and into the endzone throughout the second quarter.

Brad Kruger was the first to find his way in on a 10-yard run just two minutes into the 2nd quarter. The Herders offense struggled for 10 and with a faked punt on 4th down, they found themselves short once again, turning the ball over on downs.

Brayden Bruce was the next Patriot into the endzone, bursting up the middle for a 32-yard run into the endzone, helping to increase the Patriot score 35-0 with 7:07 remaining before the half. A change in luck for the Herders next drive brought them down the field and into the endzone, but a holding penalty recalled their touchdown and put them at a 4th and long.

The bad turned to worse as the Herders fumbled the snap and were faced with another turnover on downs, bringing the Patriot offense back onto the field. With only a few minutes remaining in the quarter, the Patriots pushed their way down the field once again and Jess Claycomb was able to make the final shove, into the endzone with 15.7 seconds remaining, putting the Patriots up 42-0 going into the half.

Shortly thereafter, another Herder fumble was recovered by the Patriots and the offense was able to work their way back in for another touchdown. As the score increased to 54 for the Patriots, the clock continued to run and the subs found their way onto the field.

The Patriots would score one time in the fourth quarter to put their final score to 61. The Herders would also find their way into the end zone as the final minutes of play ticked away.

Hoping for a few more points, Glenrock went for two putting the final score 61-8, in favor of the Patriots.

The Upton Sundance Patriots will hope to keep Lady Luck on their side as they host the Big Horn Rams on Friday, in Sundance. Kickoff is scheduled for 6 p.m.

Stats from the game: 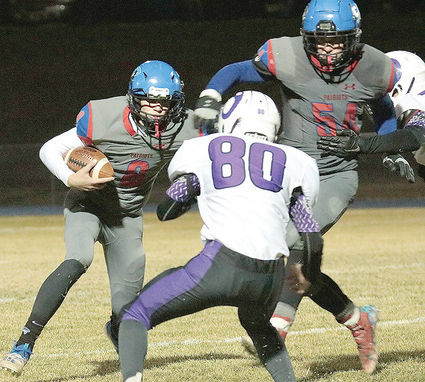