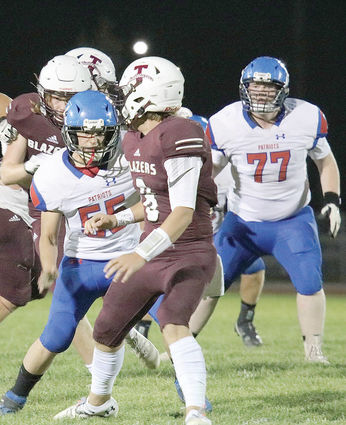 After a great start to the season, the Upton-Sundance Patriots were handed their first loss on Friday night in a tough defensive matchup against the number four-ranked Torrington Trailblazers.

The game on Friday night started much like the previous weeks with the Patriots first on the scoreboard when quarterback Brad Kurger found Brayden Bruce for a 75-yard touchdown pass. It wasn’t long after that the Trailblazers were able to find their way into the endzone as well.

Quarterback Blaine Bivens found Aiden Hull for a 17-yard reception of his own and put six on the board for the Blazers. With a successful extra-point by Chase Miller, the Trailblazers were up 7-6 over the Patriots.

As the first half wore on, the Patriot offense continued to move down the field, but was unsuccessful in getting back into the endzone. The defensive unit for the Patriots was also holding strong, forcing the Trailblazers to settle for a field goal as the half wound down. Going into the break, the Patriots found themselves in unfamiliar territory, trailing the Blazers 6-10.

The Patriot offense found their groove in the third quarter as they pushed their way down the field. While time ticked away, Brayden Bruce was able to find the hole for a 20-yard run into the endzone to bring the Patriots back into the lead.

Hoping to put some distance between the Trailblazers and themselves, Kruger found Ethan Mills for a successful two-point conversion, allowing the Patriots to take the lead, 14-10. It was the Trailblazers who struck first in the fourth quarter when Bivens found Keiser Wolfe with a 45-yard pass, sending him into the endzone for another six points.

With another successful extra point, the Trailblazers took the lead, 17-14. The rest of the quarter was down to the wire as both defenses were working their hardest.

The Patriot offense pushed their way down the field while the final minutes ticked away, but a fumble on the 10-yard line with ten seconds remaining sealed the fate for the Patriots, and handed them their first loss of the season with a final score of 14-17.

The Patriots, however, won’t let this loss slow them down. They will be back on the field, in Sundance, for a home game against the Tongue River Eagles on Friday night at 6 p.m.

Stats for the game 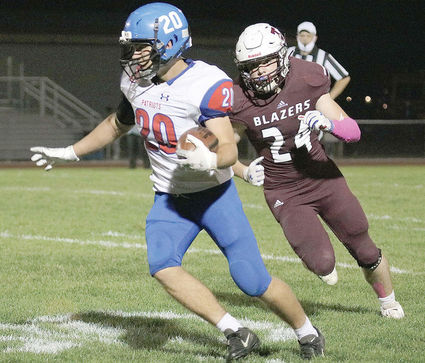