The Sundance Lady Bulldogs had a busy week on the court this week traveling to Upton for a late night showdown on Tuesday and playing host to the Glenrock Herders and the Douglas Bearcats on Friday.

On the road Tuesday, the Lady Bulldogs were up against a friendly foe in the Upton Bobcats. Taking the match to four games, the Bulldogs squeaked out a victory, four games to one. Game one was down to the wire with the Bulldogs walking away with the 25-23 victory. Game two moved a little quicker with the Lady Bulldogs finding their groove on offense and taking the 25-17 victory. As game three progressed, the Bobcats would not let the Bulldogs get too far ahead as the race to 25 got pushed into extra points. Neither side was willing to give up but it was the Bobcats who ended up victorious in a 29-27 victory, pushing the match into four games. Going into game four, the Bulldog offense continued to be a threat. Taking the 25-18 victory in game four Ty Holloman and Sherry Negaard dominated the net for the Bulldogs throwing down 17 and 13 kills respectively for the night.

Opening up home play on Friday afternoon Sundance faced the Glenrock Herders for their first matchup. The warmups look a little different this year as each team gets the floor to themselves for seven minutes of warm up. Once the games begin, the teams will stay on their respective benches and there will be no shaking hands at the end.

Starting on the receiving end, the Bulldogs were able to set up Ty Holloman up for the kill. Throwing down a hard kill, Holloman set the tone for the first match against the Herders. After a short back and forth in serving between the Herders and the Bulldogs, Sherri Negaard stepped up and found her groove serving eight straight points for the Bulldogs putting them up 12-6. Sundance continued to add points to the board while the Herders struggled on the receiving end. Finally able to get a few quick points behind the serving of Haylee Heaps, the Herders began closing the gap with a score of 10-20. Unfortunately for the Herders it was too little too late and the Bulldogs got the 25-14 victory in game 1.

The Bulldogs continued their excellent serving into game two jumping out to a 3-0 lead behind Aftyn Marchant’s serves. Much like game one, the Herders struggled from the get go. Cana McInerney continued to up the score for the Bulldogs serving six straight points before the Herders called a timeout to figure out where they needed to be on the court. With the score 2-11 the Herders found themselves in desperate need of scoring. Gaining a few points at a time, the Herders began to close the gap to nine, 12-21. Some impressive blocking at the net by Bulldogs Ty Holloman and Sherri Negaard made the Herders work hard for any points they were going to get. Another back and forth of points in the end gave the Bulldogs a 25-17 victory.

Game three turned out to be much of the same for the Sundance Bulldogs. Led by the serving of Sherri Negaard and Aftyn Marchant, the Bulldogs were able to put points up on the board quickly for the 25-13 victory.

The second match of the afternoon brought in a tall and talented team from Douglas. Led by the 6’4” hard hitter Allyson Fertig, the Bearcats jumped out to a 4-1 lead. Sundance continued to work their offense but a tall team at the net made it very difficult to get many hits off. As Bulldogs began to gain some ground, Allyson Fertig continued to be a nuisance in the net, throwing down some hard kills and getting the big blocks for the Bearcats. “I was pretty intimidated at first,” said Bulldog return specialist (libero) Aftyn Marchant , “but we just needed to get good positioning and I knew we could do it.” The Bulldogs were able to do just that as they continued a back and forth of points with the Bearcats. However a couple short runs in serving by the Bearcats gave them the 25-16 victory over the Bulldogs in game one.

Game two began a little better for the Bulldogs as they were able to keep the score close. Bailey Heasyer, Brook Hofland, and Ty Holloman came up with some big blocks of their own against the hard hitting Bearcats, keeping them in check. Sundance junior Brook Hofland and senior Sherri Negaard continued to attack the net but both had difficulty getting their hits around the tough front row of the Bearcats. In the end, the Lady Bulldogs fell to the Bearcats with a score of 13-25.

Needing a win in game three the Lady Bulldogs laid it all on the line. Both teams played exceptionally well throughout the final game of the match. Holloman came up with a big block on the Bearcats at the onset of the game to get the crowd back into it, however Fertig had an answer as she slammed another kill into Sundance territory. Keeping the score close, 14-19, Sundance took a timeout to discuss some strategy. Unfortunately it wasn’t enough as the Bulldogs would only go on to score one more point for the game and the Bearcats would take the 25-15 victory for a 3-0 sweep over the Bulldogs.

The Lady Bulldogs will be back in action on Thursday as the Newcastle Dogies come to town. This will be senior night for the Bulldogs. Games will begin with JV teams at 5 and 6 followed by varsity at 7p.m. 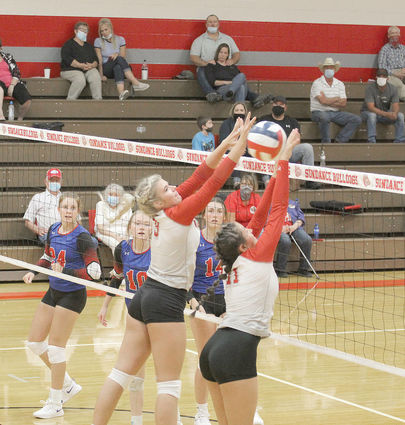