Mary Ann was born in her grandparent’s sod house at Mud Butte, SD, on Oct 30, 1926 to Joe and Novice Short. Her grandmother, Eunice (Mrs. B.G.) Titus, the local midwife, delivered her.

Her older brother Leo was thrilled to have a baby sister and before long she had a baby brother, Lloyd, who became her constant companion and friend. Grade school years were spent a few miles down the road at the Mud Butte Country School.

She loved to tell stories of riding a pony to school, speaking contests, rally days, the frequent teachers and missing school for months because of prairie blizzards. When not in school, there were ranch chores, hikes on the prairie, playing on Mud Butte and family gatherings on Sunday at the Titus home.

In the 1930s and early 1940s, life was not easy for Mary Ann and her family. Since country school didn’t go beyond eighth grade, Mary Ann had to find a place to stay in town to continue her education.

The first nine weeks of ninth grade were in Newell where Mary earned her room and board by working on a dairy farm. She was pleased when the dairy was sold, and she then moved to Spearfish and lived with Aunt and Uncle Martin and Lottie Mahoney, and Cousin Helen.

At Spearfish High School, she soon became known as “Shorty”. During sophomore and junior years, she worked for her room and board at the Jim Nelson home.

As a senior, and her first year at Black Hills Teachers College, she worked and enjoyed staying at the home of Dr. Ward. There was little time for school studying at her lodgings, so Mary Ann had to find time to do her homework at school.

Still, she kept up with her classwork and found time for Girl’s Athletic Association activities (basketball), Homemaking Club and to be on the Lookout newspaper staff. She graduated with a teaching certificate and began her teaching career in a rural school by Fort Meade followed by a rural Newell school by Horse Creek.

While teaching, she met Leon (Bob) Boe. Bob would fly a small plane over her schoolhouse and drop love letters to her, making her upset at the distraction it caused to her students.

They were married at the Belle Fourche Court House on June 1, 1948 and started their adventurous life together in Denver where Bob was attending Barber College. Not one to be idle, Mary Ann worked as a waitress and learned new skills.

They relocated to Rapid City when Bob became a barber. In their early years, they lived in Denver, Sheridan, Rapid City, rural Piedmont, rural Vale and Lead; and during those years, Dean, Susan, Sally and Mike joined the family.

They left the Black Hills in 1955 and settled in San Manuel, Arizona, where Bob worked in the copper mine and Sharon and Patrick were born. In 1957, they relocated to Grants, New Mexico, for a new mining opportunity.

They missed their family in the Black Hills so in 1959 they moved the family to Shirley Basin, WY, and Bob worked in a uranium mine while Mary Ann was a homemaker. After Bob was injured in a mining accident, the family moved to Casper for a short time and then to Rapid City in 1962. In 1964, the family settled in Newell where they hosted friends, family and two foreign exchange students.

When her children were older, she returned to college to get her degree and graduated from BHTC in 1969. She taught grades first through eighth at the Moreau School North of Newell, was a librarian at Newell High School, and taught grade school in Nisland.

In 1977, they moved to Moorcroft, WY, where Mary Ann ensured first and second graders could read, add and subtract before the end of each school year. She worked many extra hours ensuring that every child succeeded. Mary Ann retired from teaching in 1992 and moved with Bob to a mountain home outside Sundance, Wyoming.

Through the years, Mary Ann used her natural athletic ability to engage in boating, water skiing, archery, gardening, hiking and most of all running. Before she retired, her brother Darrel introduced her to the National Senior Games.

For many years, Mary Ann competed and excelled by winning gold and silver medals in running and jumping events at various state games in Wyoming, Montana, Utah, Nebraska, South Dakota and Huntsman World Games in St. George, Utah, and at the National Senior Games in St. Louis, MO (1989), Pittsburgh, PA (2005), and in Minneapolis (2015). In 1993, she received the Outstanding Female Athlete Award at the South Dakota Senior Games and she still holds national records for her age group.

Her last years were spent with her daughter and son in law in Worthington, MN, and recently in Sioux Falls, SD. During those years, family travels took her to Illinois, North Dakota, Montana, Oregon and her home in the Black Hills.

Mary Ann was a loving, devoted wife to her husband and loving and supportive mom to her children and grandchildren. To those who knew her, she was caring, encouraging and always willing to listen. 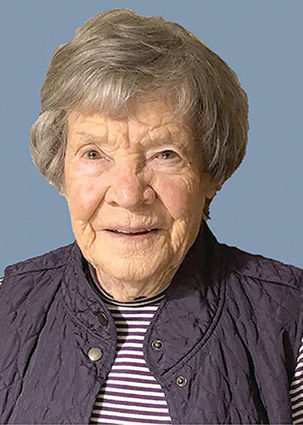 She especially cherished her grandchildren and great grandchildren and she was always happy to cuddle a baby. She will be dearly missed and forever in our hearts that are joyful knowing she is now running with the Lord.

A memorial to celebrate Mary Ann’s life will be scheduled at a later time when family and friends can gather. In the meantime, in honor of Mary Ann, take a walk, engage a child, garden, watch a sporting event and enjoy some strawberry ice cream.

Memorials may be donated to the National Senior Games Association at http://www.nsga.com or to the donor’s choice. A special thanks and appreciation to nurses Cat and Diane of Sanford Hospice for their compassionate care. http://www.millerfh.com