John Edward Queen, 84, of Moorcroft passed August 11, 2020 in Sundance, WY after a courageous battle with cancer.

John was born April 24, 1936 to Elmer and Bertha (Crago) Queen at the home of Aunt Georgie Crago. He was joined by older sister Sadie.

In 1943, they moved to the Barton Ranch to live in a one-room schoolhouse. John attended country school and later went to Sundance High School.

He started his ranching career at the Campstool Ranch. He married Phyllis Davis on Oct 18, 1959 in Newcastle, WY.

John started working full time for the State of Wyoming Highway Department. On the side, John also ran heavy equipment, unloaded mud, drove truck or anything else he could do to help his family out.

After his retirement from the State, John did work for K & H Construction, Fuller Construction and Basic before his final retirement in 2006. In 1991, they purchased Hopper’s Bar and Dee Ann and Phyllis ran it with John helping when he was not working or visiting.

He could always be seen doing the Jubilee Parade for the bar every year. They sold the bar in 2006 and began retirement together.

John needed more to do, so he bought a four-wheeler with a plow and began plowing everywhere he went. There probably was not a driveway, sidewalk or parking lot that he has not touched over the years. In the summer he was mowing, knocking down weeds or whatever anybody would need done.

Over the years, John was an avid bowler, hunter, golfer and card player. On Friday nights, John would also take his ladies to play darts.  He was well known for going downtown in his Orange Kubota to take Phyllis for lunch or an afternoon drink.

In December of 2019, John and Phyllis moved into the Sundance Long Term care and continued to take care of each other. He had lots of angels helping and visitors throughout the weeks. 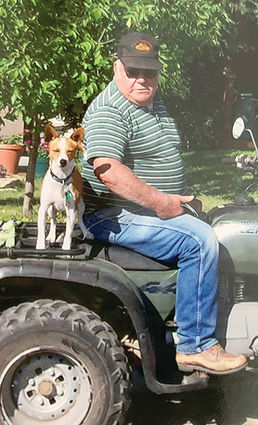 Survivors include his wife Phyllis; son, Tom and grandkids, JD and Jess, great-grandchildren, Teagan and Tucker; daughter, Dee and granddaughter Tara and great-granddaughter Nicole; sister, Sadie and her children, Albert and Kathy; sisters-in-law, Norma, Kathy (Lloyd) and Diane; and numerous nieces and nephews.

Memorials can be made to Moorcroft Public Library or Moorcroft Senior Center.  Cards can be mailed:  Phyllis Queen, P.O. Box 316, Moorcroft, WY  82721.