Political hopefuls often talk about draining swamps and cutting back federal overreach, but Bryan Miller says he actually knows how to get those things done. The candidate for U.S. Senator Mike Enzi’s seat believes his unique background sets him apart not only from his opposition, but also from most people serving in Washington, D.C. today.

“I see the value of looking at things from a different angle. We get so entrenched in Washington, D.C. in specific ideology, specific ways of doing things, because it’s the way it’s been done for a long time,” he says, speaking after his visit to Crook County last week. “That does not help anybody.”

After graduating from Sheridan High School in 1984, Miller earned a degree in biology from the U.S. Air Force Academy and then became a pilot of KC-135R air-refueling tankers.

“I did a number of tours overseas, starting off with Desert Storm. I ended up spending time in some really interesting jobs; before 9/11 I had the opportunity to become a presidential advance agent for Air Force One,” he says.

“I spent about two-and-a-half years as a field agent, going out ahead of Air Force One and making all the arrangements for the crew of two to five hundred people who follow the president around the world.”

Later, at the Pentagon, “I ended up becoming the chief of presidential flight support,” he says.

This involved taking charge of the president’s movements during the events of 9/11. He was then hand-picked to join the team that established the U.S. Northern Command and helped write the homeland defense and integrated Homeland Security plans.

“Again, this is at the ground level,” he says. “That’s the nuts and bolts, where things happen,”

In 2003, the SARS pandemic hit, and Miller helped to write the civil support plan for the 50 states, he says. Five years later, stationed back at NORAD, he was asked to update it for the next pandemic.

That was his last job for the Air Force. During his time in the military, he also taught at the academy for a few years and earned two Masters degrees.

“When I got out of the Air Force, I immediately moved back to Wyoming,” he says. “I’d never given up my residency of Wyoming, not for a single day, which was important to me because I went around the world for 23 years on active duty and four years at the academy saying, ‘Wyoming is different’.”

He still believes that, he says. Wyoming is different in its politics, which is why he feels frustrated that this state still follows the “crony” path of continually sending the same people and families to D.C.

“That’s unfortunate, because it’s not truly representative of the state and, in my opinion, it causes a lot of stagnation,” he says. He also believes it’s why there are so many divisions in Congress.

“I would like to work on that – and I know I can,” he says. The reason for his confidence is that, on returning to Sheridan, he started a private consulting and facilitation business.

“I work with organizations that have very disparate goals and I bring them together and I get them to basically come to an agreement that works for everybody,” he says.

Often, he says, different governmental departments are doing exactly the same thing, but have no idea they share goals. It’s his role to help them save effort and money by combining those projects.

Miller’s believes his time behind the scenes across a swath of D.C.’s departments plus his business experience as a facilitator is what would give him an edge in Congress. It has also been his inspiration in deciding what he would do with the opportunity.

“I’ve got experience that goes way beyond the experience of someone who’s grown up in the political world,” he says.

“My other reason is that I’m sick and tired of government overreach. We see it all over in Wyoming,” he says, pointing to the unelected bureaucrats tasked with actually writing federal bills as a large part of the problem. They write the rules, not necessarily in a way that reflects the intent of Congress, he says.

Miller had been planning to run six years ago, but decided against it when Enzi opted to run for another term. He spoke to Enzi often during that campaign, he says, and they talked a lot about how rank has its privileges – but that’s not a concept he agrees with.

“Congress is not the military, and that needs to change,” he says. The length of time someone has served in Congress should not be used to decide whether they sit on a committee, he explains – it should be purely based on merit.

“My ultimate goal is to get folks in D.C. to understand that Wyoming is different. We have many generations of good, solid leaders in Wyoming that haven’t been corrupted by a lot of things that occur on the coast,” he says. “When was the last time that you have seen a congressman from another state or a senator from another state come to Wyoming…to see who we are out here?”

If you’re going to build relationships, you need to be talking to people, Miller says, arguing that this is one of the strengths he has fostered in his facilitation ventures. His desire for D.C. to see Wyoming more clearly also applies to lobbyists, he says: if a lobbyist wants to make a case to him on a particular issue, he’d prefer them to come to Wyoming to do that, so they can first see what this state is all about.

Miller believes the federal government has become bloated, but there are simple solutions to fix it.

Mission creep has affected all federal departments, Miller says, and he would like to work on returning them to doing, “what they are supposed to do, not what they would like to do.” 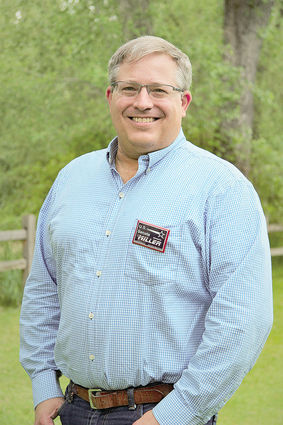 “You’ve got to do it one at a time, but once you do one and the other organizations see what’s happening, they’ll restructure themselves,” he says. “They’re always competing for money between organizations, and if you can get them to cut back and combine processes and research involvement projects, you get their attention real quick.”

While in D.C., Miller says he liaised mainly with the people on the grassroots level in various departments – and it’s those people who know how to make cuts.

“I’ve been working at the ground level across the board, in the states, in the federal government and I’ve even seen it a little overseas. I’ve certainly seen it in the military and I know who you need to talk to in order to find out where the waste is,” he says.

Fixing the bloat means getting the right people in to push back against it and look at the problem from more productive angles, Miller says. “That’s the kind of leadership I want to bring to Washington, D.C.”