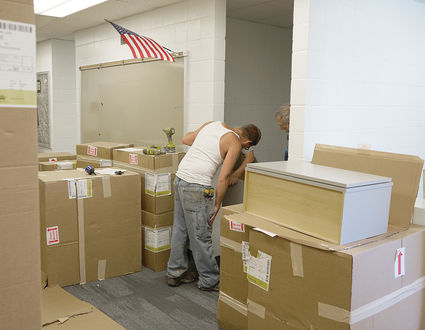 Students will be returning to their school buildings this fall, says Superintendent Mark Broderson. To make that happen, employees from every department are working on a framework to keep kids safe despite the ever-changing picture of the COVID-19 pandemic.

“We feel this is the best option for our students for the following reasons: lack of proper connectivity to all homes, reduced stress for parents, building relationships between staff and students, allowing parents to return to work and teachers to teach,” he says. “As a district, we believe our best delivery model is keeping our students in front of teachers rather than screens.”

However, the district is also well aware of the need for safety measures and is making adjustments to such things as cleaning practices, exchanging equipment and physical spacing.

The Wyoming Department of Education has yet to provide a template to help school districts decide how to open back up and is not expected to do so until the middle of July. Putting the right precautions in place to ensure student safety will take time, Broderson says, which is why Crook County School District (CCSD) has already got the ball rolling.

“I don’t think parents want to wait until mid-July to find out what our plan is and I don’t think mid-July to mid-August gives us enough time to work out all the details of our plan,” he explains. “There has been discussion going on for the past month.”

A recent survey done by the school district showed that over 80% of parents in Crook County are ready to send their kids back to school right now, Broderson says.

“The teachers and the parents did a great job during the COVID-19 closure, but it’s not the same as teaching students in a classroom setting,” he says. “Our plan right now, in the fall, is to return to normal, brick-and-mortar, students-at-the-desk, teachers teaching.”

Things won’t look the same as they do during a normal school year. The planning process will address how best to help kids follow social distancing and hygiene practices while ensuring that the virus does not spread through the schools.

One of the ideas being considered is to create “bubbles” of students that stay together throughout the school day and do not overlap. If an infection is detected within one of these bubbles, or “herds”, it is less likely to cross over to another group of students.

“For recesses and things like that, we will try to keep our herds intact,” Broderson says.

Some schools are attempting ideas such as staggering days, so that some kids will be in the building one day and a different group will be there the next day. While that might be of value in bigger districts, says Broderson, here “with the distances we travel and working parents, I think it adds a hardship to our families.”

These ideas and more are being discussed and how exactly things will look in the fall is not clear, the superintendent says. Ultimately, a framework will be put in place that solves as many questions and issues as possible.

“We are addressing it, we are looking at our options, and we are trying to make sure that everything is safe in the fall so that all the households that have concerns will be able to send their kids,” he says.

The district will also be taking measures to keep suspected COVID-19 cases out of the buildings.

“We have to make sure that we share the importance of screening the kids. We don’t want to jeopardize an entire building for one kid to come to school,” he says.

While Broderson recognizes that parents need to work and daycare is important, allowing a kid who is showing symptoms to come to school would put everyone in a bad position, he says.

“We will have things in place so that we can educate the kids who are quarantined and that have been exposed, keep them at home for the two weeks and then let them back so that we can hopefully keep the doors open,” he says. For this reason, remote learning may still be a part of school life for a while, at least for some.

From transportation to the kitchens, teachers and principals to custodians, nurses to special education, everyone who plays a role in the functionality of the district is represented on the committee that has been discussing best practices and putting plans in place.

“There are a lot of people on this committee – but then, there are a lot of moving parts,” Broderson says. “Our primary concern is the safety and well-being of students and staff as we consider recommendations for the reopening of schools.”

Plans for everything from job duties and student materials to meal time and recess are being created using a leveled approach to schooling. The district will upgrade or downgrade these levels according to the current situation regarding the pancemic.

At the “green” level, there are no known cases among the staff or students and, while precautions will still be in place, school will be as close to normal as possible. The next level is yellow, and this will be followed “if there are a few people in town that have it and we can identify them,” Broderson says.

At “red level”, protocols will be followed if COVID-19 is growing within the community but cannot be traced. Finally, there is “black level”, which Broderson says is an undesirable place to be.

“That is where we spent the last quarter of this year, with the doors closed and nobody in the building. We don’t ever want to go back to that level,” he says.

Broderson feels, however, that the schools will be able operate effectively at any level from green to red. Until school begins, the protocols for each level will continue to evolve as issues are ironed out and new ideas are incorporated.

“There are going to be substantial changes made between now and when we start in August, but we prepare for how it looks for this hour and then in another hour we’ll look again,” he says.

The district will be putting into action many of the lessons learned over the last three months.

“I thought the teachers did a wonderful job, I thought our communities and our parents did an exceptional job with what they were dealt. We had a two week window to get ready and it was game on, and so for what they went through they did a superb job,” Broderson says.

Even so, a lot became clear through experience: some things worked and other things turned out to be problematic, he says, such as asking parents to pick up student packets in the middle of the working day.

The survey that was recently sent to parents asked questions about the things that parents learned, too, and identified things they do and do not want to see moving forward. The committee is acting on those opinions as much as possible; for instance, the survey made it clear that food security is important to county students.

Around 25% who responded said that the meals distributed by the district made a big difference in their homes and 30% said they were greatly appreciated though the family could have gotten by without them if necessary.

Parents also made it clear that they would like the school to use a consistent platform for teaching kids remotely. The survey showed that parents do not want to be using six different apps and programs to access classes.

The use of different apps was not planned, Broderson notes – with two weeks to transition from the classroom to a whole new way of teaching and no time to collaborate with colleagues, teachers naturally gravitated towards the mediums they knew best. However, if some or all students must learn from home again in the future, he says, this request will be fulfilled.

Similarly, parents asked for a clearer schedule, which will also be addressed by sticking to the school timetable and encouraging teachers at each grade level to synchronize their curriculum maps.

Some sticking points remain at this state of the planning process. The first of these is transport.

Quadrupling the bus routes to solve this problem would need more vehicles, manpower and time than the district has available. The district is considering asking parents to volunteer to deliver their kids for the time being, but, says Broderson, “We haven’t crossed that bridge yet.”

Meal times could also be a problem, with the student population converging in one place at the same time.

“In Sundance and Hulett, I think we can get more tables and we can spread the kids out and maybe lengthen the time of lunch hour so there are not so many kids in there at one time,” he says.

In Moorcroft, however, the student population is higher and the lunch room is smaller, so further measures may be needed. For instance, the schools could move to more of a takeout lunch system and dining outside may also be possible while the weather is warm.

“We’d like to feed them good meals and not sack lunches if we can, but if we get to that point where we have to feed them in their rooms, we will,” he says.

In case of a situation where some kids – or perhaps all kids – will need to return to the lockdown scenario of the last few months, Broderson says connectivity will be another issue. According to survey responses, 16% of the families in the district experienced problems with poor internet.

Not all cases involved a complete lack of internet connection, he says, but a situation like this is bound to reveal some weaknesses. Some families likely thought their connection was fine until they had three kids all trying to connect to a Zoom call with their teachers.

The district did purchase some hotspots to be used by kids without other means of accessing the internet, but even that doesn’t cover the full scope of the problem. If there’s no cell service at a kid’s house, the hotspot will not work.

“If parents have issues with connectivity, they should start talking to the county commissioners or their internet providers if they want to get that resolved,” he says.

Some parents indicated that it was a problem to secure the devices for their kids to actually do the work on.

“We did give out a lot of devices to take home so kids could use those,” he says. A certain percentage, however, either did not or could not take advantage of this.

Decisions have not yet been made regarding fall sports. Broderson says the district is waiting for the Wyoming High School Activities Association and Wyoming Public Health to offer guidance on this issue.

“These won’t really be district decisions, I don’t think,” he says.

A number of households indicated in the survey that they don’t yet feel comfortable sending their kids back to school this fall, and Broderson says the district understands their concerns. It’s to alleviate these concerns that the committee is working hard on its plans, and the district hopes to create an environment that every parent feels is safe.

“The COVID closure taught us a lot,” the superintendent says. “One of the things we learned was that having students in front of effective teachers is the best way to educate them.”