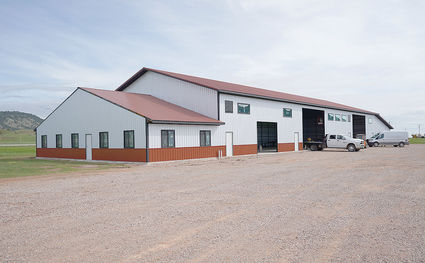 A new structure on the south side of town, near the port of entry, will soon open its doors as the location for Four Aces Fabrication, a local business until recently housed at the property of its owner, Jay Pixley.

“It’s been out here at my house south of town, on Hwy 585,” Pixley says. “We’re just a mile out here and it’s been here for about ten years, but we’re moving over there and building a new facility.”

As well as showing off what the business can do, the move allows the business to take advantage of a better position and potentially look to future expansion, he continues.

“We definitely wanted to be out near the interstate – and we needed a lot bigger building. And it’s also an expansion, we’re going to try to expand in a few different directions, hopefully,” he says.

“Mostly, we build buildings now – smaller buildings up to big ones like we’re building out there. I hope to expand in a few directions, all metal work, welding and fabricating stuff. Who knows where it will lead.”