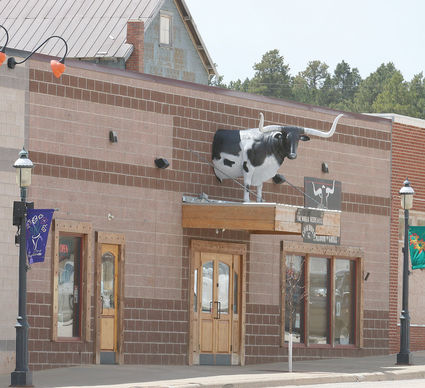 Representative Tyler Lindholm and Senator Ogden Driskill were all geared up to fight the good fight on behalf of local restaurant owners on Monday, but soon discovered that the county’s emergency operations center has already set the ball rolling to secure a variance on the new state health orders for all county eateries.

Lindholm began his request to the county commissioners by stating that the orders allow for variances and that he has spoken with some restaurant owners about what it would look like for them to put in for individual exceptions.

Instead of each of them needing to go to the trouble of figuring out their own request, he said, “Wouldn’t that be just be slick if we could do that as a countywide variance? …That way our businesses here in Crook County could just follow that countywide variance.”

Driskill requested that the county commissioners create a “base template” that a restaurant owner could come in and pick up, and change if they didn’t want to follow it to the letter. The hope is to get the restaurants back in business, he said, as they have been the worst hit during this pandemic.

“I’m sick and tired of this deal, Crook County is a much different animal than Teton County or Laramie County,” said Lindholm, telling the commissioners that he feels this county could open right back up while still respecting the virus is out there.

The bottom line, said Baron, is that there are orders requiring social distancing that affect anybody with a business, so business owners should read them to see how their particular business is affected.

Baron asked Lindholm and Driskill to consider the problem from a different angle: the state, he says, has “a whole slug of agencies” that regulate everything from how spas operate to liquor licensing. Asking local entities to figure out how exceptions should work is “ridiculous” when those agencies exist precisely to fulfill the skill set required to make such decisions.

“Local control when we have no local control is frankly nuts,” he said. Exceptions should be created by the experts and passed down to local authorities to adopt or deny.

Baron reiterated that the commissioners, “don’t have any authority to do this, this is all coming from the state”, and said the two legislators should not be telling them they need to create variances.

Driskill responded that, in Wyoming, we always want more local control, and that’s what they’ve done by allowing countywide variances. He felt the commissioners do have a role to play in putting together a standard set of rules and facilitating on behalf of the businesses.

“For right now, all of us want to be open and get going,” Driskill said.

Driskill asked the board to create a template and ask for a countywide variance under certain conditions. Once that’s done, he said, any business can sign the paper and send it to the state and will be allowed to operate under those conditions.

Baron repeated that the commissioners have done their part by appointing incident command and a county health officer. Through this, he said, there already exists a mechanism for dealing with variances and individual exceptions.

Baron recommended to the board that questions about these things be directed to the emergency operations center and county health officer. All points turned out to be moot, however, when Becky Tinsley, incident commander, informed the commission that, “We do have the exception forms, that was drafted last week.”

These forms have been shared with city halls, posted on social media and made available on the county website so restaurants could apply, Tinsley said. To date, only two requests have been received, though she is expecting a couple more.

Public Health has been reviewing those requests as well as other thoughts on re-opening businesses that have been submitted. On behalf of the county, she said, incident command has done everything possible to work with businesses, given what the state directed.

Only a handful of eateries shut down due to the restrictions, she said, and it was because they chose to do so.

A countywide variance has also been drafted for bars and restaurants, she continued. Requests should be sent directly to Public Health so that Dr. Larsen can review them as quickly as possible.

However, she noted, the timeline for each request is limited by the approval of the state health officer so, while the county team would often like to give requests their blessing right away, each must go through the approval process in Cheyenne.

Baron proposed that the draft be presented to the commissioners the next day to make them aware of what is being requested. He explained that the thinking behind them is that, “As things get better, things become more open. I think we need to keep that mindset”.

Start restrictive and open up from there, Baron said, adding that the county must be mindful that tourist season brings people from all around the world. The county will have very little control over who visits and that could be a huge impact; “That’s why we’ve got to keep track of this stuff,” he said.

Baron also encouraged any organizations wanting exceptions, such as churches, to contact the incident command center, “so that we can put together good stuff that people actually want here in Crook County.” No requests have yet been received for exceptions from social distancing orders, he said.

Lindholm asked if it would be helpful if he, Driskill and the commissioners put in letters of support along with the countwide variance application for bars and restaurants.

“This is a public health issue, it’s not a political issue,” said Baron; if the science doesn’t work, that would be the time to talk about such a move.

Tinsley expressed appreciation that everyone has been supportive, as dealing with the crisis has not been easy, but felt that the team has received good feedback from the state and confidence that what will be put forward in the request will not be outside the realms of possibility. She asked for the chance to submit it and have it passed simply because it’s the right thing to do before looking at other options.

Driskill thanked Tinsley and the rest of the team for the job they’ve done to get the county where it is now and said he is happy to watch from sidelines and leave them to do what they do.

The next morning, the commissioners reviewed the draft variance. Though none had any issue with it, Commissioner Jeanne Whalen expressed that she did not feel comfortable making a motion to submit the variance to the state on the basis that the commission has not had control over the situation, though she agreed to second one. In the interests of moving things along, Commissioner Fred Devish made the motion.

Commissioner Kelly Dennis abstained from the vote after making a statement that he believes the actions of government at all levels over the last several months have been “unconstitutional” and would like to see legislators correct them.

The commission also discussed small changes to the county closure orders, such as to allow use of the basement door and allow the fire halls to hold zone meetings. The courthouse doors will remain closed until May 31, however.

At the present time, explained County Clerk Linda Fritz, it is not possible for employees in her office to work from home due to necessary business, such as elections. If one employee became sick, the office would “cease to function”; the commissioners were in agreement that this would be extremely problematic.

The library plans to follow the lead of the courthouse, said Library Director Jill Mackey. Whalen commented that, unless there is a significant change to the situation, it is likely that the county will open up its buildings again on June 2.

What’s in the variance?

The draft variance for bars and restaurants presented to the commissioners by County Attorney Joe Baron on Tuesday, which will be sent to the state health officer for approval, would allow them to open if they notify the incident management team and provide operating plans, while also following procedures including:

No congregating in waiting areas

Hand sanitizer available at the door

Employees checked for symptoms with temperatures taken before every shift

Logs kept of all patrons entering the establishment

Cups, lids, napkins and straws to be handed directly to patrons by staff. Utensils to be placed on tables after patrons are seated

Staff to avoid touching items placed on the table

High-touch surfaces such as tables, chairs and door handles to be disinfected hourly

Buffets may not be self-serve.