Schools will only partially reopen

Distance learning to continue for rest of school year 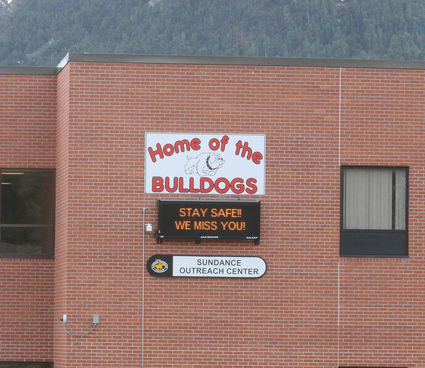 Most kids won’t be returning to class during this school year, but Crook County School District (CCSD) is developing plans to make sure those students who are struggling receive the attention they need, while the seniors will go out at graduation with a bang instead of a fizzle.

Plans are not yet finalized for graduation ceremonies, but the overall idea is to stage a drive-in event for the seniors. Each family is expected to be assigned a number of parking spots in the high school lots for their vehicle, which will contain the students and their families.

In the plan, circulated by Sundance High School Principal Jim O’Connor, students will be asked to wear their gowns and will remain in their vehicles except to walk to the stage to receive their diploma. The number of people on the stage will be limited, as will the speeches, which are still expected to include the class valedictorian, salutatorian and president, as well as the principal and counselor.

The intent is for the ceremony to be broadcast on KYDT radio so that families can listen to it from inside their vehicles. At this time, the graduation ceremonies are scheduled to take place on Sunday, May 17 at 1 p.m. in Moorcroft, 4 p.m. in Sundance and 7 p.m. in Hulett.

This must be done through development of a re-entry plan for a limited re-opening this semester and to address plans for the 2020-2021 school year.

There will not be a return to class on a large-scale basis this school year in Crook County, says Superintendent Mark Broderson.

“From what I’ve seen, most districts are choosing to remain with their adaptive learning plan and maybe coming back in small groups and that’s what the board of trustees here and our public health official also recommended, so that’s what CCSD is doing,” he says.

Schools are now allowed to work with small groups of fewer than ten people in the buildings, says Broderson.

“This is not a return to school order, but a return to trying to do some business that is face-to-face rather than everything virtually,” he says.

“We’re going to continue as we are, but we’re working on a plan so staff can come in, they just have to be in their own rooms, we can bring in students individually or in small groups.”

Exactly what this will look like will be determined through consultation with Crook County’s Public Health Officer, Dr. James Larsen.

“He has to approve whatever we are going to do, prior to us being able to do it, and then we have to send it to the state for approval,” says Broderson.

“Business as usual is probably never going to be the same but we are looking at what we can do to finish out the school year and bring in some kids that are having a difficult time and are not keeping up. We could bring them in individually, maybe some hands-on programs and also maybe some special needs life skills kids as well.”

Meanwhile, Broderson notes that, “Summer school is probably not going to happen in June. We are looking at the possibility of bringing kids in in July.”

Broderson does not believe a full re-opening would have been the best move for Crook County students.

“It took two weeks to get into the groove with the students and the teachers and, now we’re there, we certainly don’t want to drop that and come back for just a couple of weeks of face-to-face in May,” he says. “I don’t think the reward would have been worth the risk of recontamination.”

However, the district recognizes that some students have fared better than others with at-home learning.

“For the most part, the communities have done exceptionally well, as have the staff and the students,” he says. “It’s been a very good process so far but, like anything, we have five percent of our students and households that are not keeping up with their end of the bargain and we need to probably start working with those kids so they can either graduate or move on to the next grade level successfully. There is some concern out there.”

Some kids, for instance, may have secured employment during the lockdown in order to support their family, says Broderson. Priorities can differ between households, but the fact remains that the school year is still ongoing.

“We’ve got to start tracking down some of those homes and those would be the kids we’d start bringing back in on a limited basis,” the superintendent says.

“We would like to get some of these kids back on campus and try to get them focused in the right direction for a few weeks before the end of the school year.”

If you or your child is having issues with their school work, Broderson strongly recommends getting in touch.

“One of the things we’ve been preaching the whole time is a lot of communication between the school buildings and the homes. If you need help, reach out to your building principals or teachers and let us know, and that has been with food and anything else we could help with,” he says.

If a child is having problems keeping up at this time, he adds, “We will get them the resources they need and we will do everything we can to help them out.”

Opening back up on a small scale is one thing, but developing a plan for re-opening schools in over three months’ time is quite another. It’s almost impossible to predict what needs will have to be addressed at that time.

Nevertheless, “We have to have a return-to-campus plan,” he says, and this is now in development.

There is no deadline for the plan to be completed, “but I would like to get something in place.”

School districts have been asked to develop one overall plan that includes “kind of an easement that will get us to what next August looks like,” Broderson explains.

“We are going to start with this and open our doors up and let a few kids back, and then maybe we’ll do a summer school for identified kids that we want to bring in and work with them in July, and then in August we’ll raise it up a little bit more,” he says.