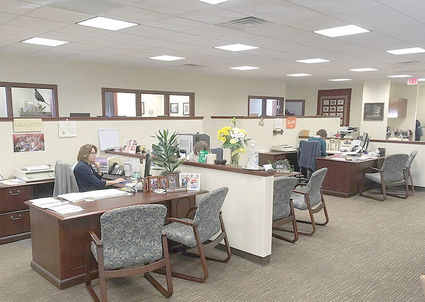 Government was not designed to operate at speed. When the federal government announced the CARES Act, and the new and unprecedented programs that would need to be introduced, it ultimately fell to local banks to place that relief in the hands of people who needed it.

Like many others, Sundance State Bank found itself scrambling to figure out the rules so it could connect as many local businesses as possible with the Paycheck Protection Program (PPP) before the money ran out. By the time the coffers ran dry, the bank had approved 114 loans at a total over $4.6 million.

“The good majority of that stayed right here in Crook County and I’m proud to say that it really provided a good shot in the arm for a lot of our local businesses throughout the county,” says Andy Miller, President of Sundance State Bank.

The CARES Act was signed into law on March 27. At that moment, the wheels began turning on everything that went into the $2.2 trillion relief act, including the PPP.

“We pulled numerous reports on all the business customers we have relationships with and we starting contacting them, personally reaching out by phone call or email, to let them know that this was coming down the pike and we thought they should be ready.”

The next day, April 2, the bank received the first draft of the application form and was told what data businesses would need to provide. This finally came in at around 9 p.m. that evening – but the program itself was supposed to kick off the next morning.

“Between April 1 and 3, it was a mad scramble of how do we take advantage of this program, how do our customers use it and how do we get comfortable with sharing the program details with any level of certainty,” he recalls. “We just knew that it started on Friday, so a few of us stayed late on Thursday trying to learn more and figure it out, see if it was up and going, and then we got a plan together and I ended up getting up at midnight that night to check the SBA website.”

It was going to be vital to hit the ground running. Though the CARES Act had funneled $349 billion into the PPP, there was no doubt those funds were going to disappear very, very fast.

By midnight, nothing new had appeared on the SBA website. Miller got to the bank early on Friday morning and continued checking for new information.

“Somewhere about 7 a.m. on Friday morning is when the program actually opened up and we could start submitting and getting people approved for funds. We were lucky enough to have started the connection with our customers long before that so we had gathered much of the information from those customers ahead of time,” Miller says.

“Basically, our lending staff here at the bank as well as our loan clerks spent the entire day from about 7 a.m. to 9 p.m. doing nothing but talking to people about the PPP program and getting their applications in, reviewed, submitted and approved.”

It was a long day for everyone, he laughs.

“I think we were all exhausted by the time we finally wrapped it up, but I’m happy to say that every single customer who had submitted an application to us, we had gone through and got their funds approved that day,” he says proudly.

Not every bank was so lucky. For one reason or another, it transpired up to two thirds of Wyoming’s banks had been unable to access the website – and there was no help to be had from the SBA that day.

“You were either in or you were out. They were so overwhelmed with trying to get this thing rolled out that a lot of banks were unfortunately left out and that left a panic out there for them and their customers,” Miller says. “I really felt bad for them.”

Meanwhile, changes were made to the rules and requirements, including an updated application.

“It was an evolving work-in-progress and honestly it was about five days before all the details of the first round came out. It took some massaging and reaching out to customers and getting updated applications taken care of and making sure we were in good shape to get them funded,” says Miller.

“Somewhere about that same time, about four or five days later, we got guidance that said, once it had been approved, you had ten days to actually fund the loan. Then the scramble comes again – we’ve got to get all these loans closed and funded within ten days of them being approved.”

It was quite the turnaround for an effort that involved hundreds of loans and millions of dollars. After regrouping, Wyoming as a whole also did well, Miller says, with a total of 7600 loans at approximately $837 million by the time the funding ran out.

“We have a lot of good community banks out there and for the most part they jumped on and said yeah, we’ve got to do this for our customers,” he says.

On April 15, the bank was sent notice at 4 p.m. that funds were running low and any outstanding applications should be submitted right away.

“There were a few customers out there who were missing one thing or the other and so we spent from about 4 to 8 p.m. calling and collecting all the information for those outstanding applicants so we could get them submitted – and we did it,” he says.

“We got every last one submitted before we left on Wednesday and it’s a good thing because, Thursday morning, there were a few new applications and the first one we tried to submit we got the rejection.”

It appears that another bill currently on the table will refresh the PPP fund with an additional $250 billion, which Miller is hopeful will be passed. There is still plenty of need, he says.

“Hopefully we’ll have the opportunity for them to take part in the program.”

In the end, considering the unprecedented circumstances, Sundance State Bank was as successful as it could possibly have hoped in securing as much of the pot as possible for its customers.

“We’d never seen anything like this before,” Miller says. “Because of the uncertainty, and the guidance that hadn’t been completely finished, I think it led to a lot of uncertainty and stress. The program had flaws, there’s no doubt about that.”

That’s just the nature of trying to get a government program rolled out at lightning speed, he says.

“I think it will be a lesson down the road, though hopefully we don’t have to come across it. There are certainly some things that could have been done much better,” he nods.

Miller is heartened by the teamwork he witnessed among the banks operating in Wyoming, which worked cooperatively to share learning and best practices throughout the roll-out.

“We’re lucky that we have the number of community banks that we do in Wyoming and we all have pretty good relationships with each other, so when these things come about we can work together and try to benefit Wyoming across the board,” he says.

But most of all, he would like to commend the staff at the bank for their hard work to make it happen.

“It’s been a long two weeks and I think we were all ready to pull our hair out at one time or another, but we made it through and I’m just so proud of my staff. I think they did one heck of a good job at keeping things together, keeping it going in the right direction, providing our customers information and coming through on a worthwhile program that will hopefully save a lot of those small businesses out there that are struggling,” he says. “I can’t thank my staff enough.”

Miller also thanks the community for its support in the form of food, flowers and more.

“It’s been well received and we are lucky we live in the community that we do,” he says.