David James Carson was born on June 7, 1964, to Joseph A. and Darlene S. Carson in St. Ignace, Michigan. He attended public school in Sundance, Wyoming and Hardin, Montana.

He graduated in 1983 from Hardin High School where he played basketball and football. David was proud of his heritage and his country.

He was enrolled in the Sault St. Marie Tribe of Chippewa Indians. He joined the United States Marine Corps in December 1983 and honorably served for two years.

He later served in the California National Guard from September 1997 to February 1999. Like his father before him, he worked hard and was a man of many talents.

He worked in the woods logging, he was a law enforcement officer, a ranch hand and he worked in construction. He was a devote Christian attending nondenominational services wherever he lived and frequently spread Christ’s message to others.

David was an avid outdoorsman who didn’t like the grass to grow under his feet. Therefore, he never stayed in one place long and traveled from place to place visiting family.

He loved the outdoors and spent most of his life there; camping, hunting, fishing or working. Inheriting these gifts from his mother, Dave was an excellent artist and cook. Consequently, his beautiful glass etchings and drawings will outlive us all.

David was taken from us suddenly on Saturday, April 4, 2020. Dave was loved and will be missed. 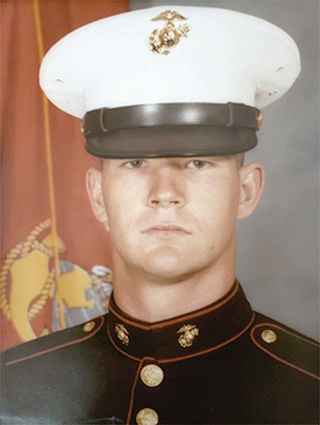 David will be buried with military honors at Black Hills National Cemetery Sturgis, South Dakota, at a date yet to be determined. A traditional ceremony cannot take place at this time due to the current COVID-19 virus environment. David’s family would like to thank you for all your thoughts, love and prayers.