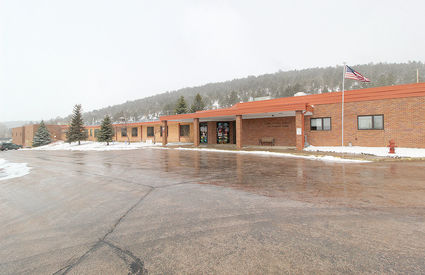 Senator Ogden Driskill and Representative Tyler Lindholm called the Board of Trustees together on Thursday evening to present their idea to secure funding for a new Crook County Medical Services District (CCMSD) hospital building. The duo hope to secure up to $45 million of the estimated $1.25 billion in federal COVID-19 relief funds that will be coming directly to Wyoming.

Lindholm informed the board as the online special meeting was called to order that Congress passed the CARES Act to provide a little more than $2 trillion in relief funding during the COVID-19 outbreak. Around $1.25 billion of that will come to Wyoming, with strict rules as to how it can be used.

It may only be used for coronavirus-related expenses, he said – “Which is good” – and cannot be used to supplement a budget that has already been passed. It must also be obligated by December 30.

“There are opportunities here, we’ve got $1.25 billion that the state legislature and governor are going to have to decide on how best to spend in the State of Wyoming,” Lindholm said.

“One of those opportunities Senator Driskill and I started talking about early on is what can we do for our community in Crook and Weston as far as helping out.”

The pair immediately identified the clinic in Hulett and the aging infrastructure of the hospital as possibilities, as well as a clinic in Upton. A typical construction timeline for a new hospital is two to 2.5 years, he said, which is tough because those funds must be spent.

“That’s a challenge, hence all the phone calls where we’ve all been talking with different entities trying to figure out if this is even remotely possible,” he said.

Lindholm said that he and Driskill concluded from their research that an accelerated timeline would be possible through a design-build model while still following the law. The hospital would be fully funded via the CARES Act.

“This is a once in a generation opportunity. I don’t remember reading or hearing about an opportunity like this before,” Lindholm said.

Driskill warned that the accelerated timeline would greatly reduce the freedom the board would usually enjoy in designing the building to precise specifications.

“It’s really critical that we have support all the way across…if there’s much of any foot dragging, we need to know about it,” he said. “Once it starts, there probably isn’t a huge amount of input.”

There is a need to act quickly, Driskill continued. The legislature’s management council meets this week to decide what to do with the money and will then hold a special session to solidify decisions.

“We’ve got to hit the ground running if we’re going to get it done and get it done right,” Driskill said. “Time is of the essence here.”

While certainly interested in the idea of a new hospital, the Board of Trustees felt caution should be exercised. Chairman Mark Erickson suggested that clarification should be sought, for example, on how the money must be spent and how quickly.

Erickson also felt that a timeline to complete the building by the end of the year is “highly optimistic” and felt that the board should be sure the hospital that gets built is the hospital the community needs.

The board hasn’t even reached a point of setting out its needs for a new building yet, he pointed out.

“There is definite interest on the part of the board and we understand the urgency, but we also need to make sure that we’re going to have what we’re proud to have,” he commented. The board wants to do what is right, he added, and, “Speed is not always your friend”.

Referring to the fact that Driskill and Lindholm have contacted several contractors to see if the project would be possible, but did not feel at liberty to name them, Erickson said that making a decision based on those contractors’ input would be like purchasing a horse without knowing it has four legs.

“It’s not a race horse, it’s a gift horse,” replied Driskill, explaining that the two legislators only spoke to contractors to gauge whether any are available who are both capable and able to take on the project.

“You’re not going to be able to micromanage this project,” he said. Putting it bluntly, he added, if the board is not capable of accepting that fact then they are not going to get a hospital.

Lindholm clarified that both legislators understand that they will not be the ones approving a hospital design or seeking contractors to make it happen.

“I’m just going to go get the funds, that’s what my job,” he said, stating that ultimately it will be a board decision to go ahead with the project or turn it down.

Trustee Connie Lindmier further added that she does not want a board decision to go after funding for this project to pull potential funding from other areas that might be available to help CCMSD through the current crisis. Driskill assured her that this would be unrelated.

Lindholm suggested that the most likely scenario to build a hospital before the deadline appears to be making use of plans already made from other constructions either happening now or recently completed, with changes made as the board sees fit.

Driskill agreed that the board would almost certainly have to accept an existing design. However, he said, the question is really: would it be better than the facility we have now?

“This truly is a once-in-a-lifetime opportunity,” he said. When in the future is Crook County going to have the opportunity to raise this amount of money again?

Yes, it can be done, Driskill said, but no, it’s not going to be exactly what the board wants. However, he commented that the board will have opportunities to improve and upgrade in needed ways – as long as those upgrades can be justified as honest needs and the district can afford to maintain them.

Tell us what you want and we will fight to get it for you, Driskill said.

“This is the one time that you’re going to get someone else to write a check for things that you need for your facility,” he told the board.

The $2.5 billion will be deposited in Wyoming’s accounts in about 30 days, said Driskill. Lindholm noted that the rules on how to spend it will arrive at about the same time, at which point it will be a “mad dash” as everyone puts forward ideas and possible projects.

With the board tentatively ready to explore the possibility of a new hospital, an online special meeting to discuss the details was set for Wednesday, April 15 at 6 p.m. Driskill assured the board that they have time to take a closer look, but only about one month.

“You’ve got time, but not unlimited time,” he said.

After the coming special meeting, Lindholm asked the board to either give them the go-ahead to seek the funding or turn the project down.

“I don’t want to paint any rosy pictures that it’s going to go smoothly or that we’re going to get the money,” Lindholm cautioned, telling trustees that the hope is to secure $35 to 40 million for the hospital, with the clinic project separate.

Even if the money is allocated, said Driskill, the board is not obligated it until contracts are signed – the funds can be reverted. The board will decide its official answer at Wednesday’s meeting.