Our mother choose to write her own obituary to “make it easier for all of us to turn the final page in the wonderful life we have all had together.” We thank her with all of our love.

My Life – My Obituary

I was born on August 16, 1931 at the Wells family home in Alva, Wyoming. My parents were Harold Edward Wells and Marion Merle (Whitney) Wells. My father named me Rose Zella and always insisted I be called by both names.

I grew up in Alva and attended grade school in the big new school house that had been a WPA project. I roamed the hills and had playhouses in the sandstone wallrocks that almost surrounded the town.

I spent many hours in the little cemetery on the hill above town tending graves, visiting with the grandparents I really never knew. Those were tough years, the aftermath of the depression, grasshoppers and Mormon crickets taking over the country- side, the drought with the creek and wells going dry, lots of dust and just as we were recovering from all that World War II came along and we suffered through shortages, rationing and all the hardships and heartaches of war.

Time came to go to high school and I started in Belle Fourche but there wasn’t money to pay rent or board and I was too bashful to work out so I came home and went to Hulett to school. My dad put a little cabin on the land he owned and I batched until he got the house built and moved the rest of the family.

I did not want to go to school. Being raised in the country atmosphere of the little town of Alva and being free roaming and a little shy, I kicked myself all the way to school the first day. But when I walked into the classroom I saw this guy in a brown plaid shirt look at me and I knew he would be the love of my life.

After graduation I married that guy, Richard ‘Dickie’ Proctor. We lived briefly at Hulett, Alva and in a sawmill shack at Devils Tower. When he got a job with the State Highway Dept., we moved to Sundance where the remainder of our married life was spent.

Over 70 years of blessings and happiness with hard work and a few sorrows thrown in. The blessings were six children: Deborah Kay, Dana Rae, Rick Edward, Randel Allen, Richard Kelly and Kyle David.

With the first five Little Proctors, as they were called, I was a stay-at-home Mom. I wrote news items for the Sheridan Press just as my mother did in the Hulett community.

I also did news for the Crook County Program over KDSJ, the Deadwood radio station. Staying at home I cooked and sewed for my family, and when the last one went off to school I went to work for Crook County Abstract Co. and as a temporary in the Crook County Court House, working in all the offices except the Sheriff’s.

Later, I became Deputy County Assessor and the County Assessor. At this time a new courthouse was built and I was able to design the Assessor’s Office.

During that time I also wrote a column for the Sundance Times called “Across the Assessor’s Desk.” For that column I was awarded an International Award given by the International Association of Assessing Officers.

At this time the sixth Proctor appeared and changed a lot in our lifestyle and our household. I was soon no longer Assessor so got a real estate license and also studied to become a real estate appraiser.

I stayed in this profession for nearly 30 years, becoming a broker and owning and operating my own office, Black Hills Real Estate. I was also active in the Wyoming State Realtor Association and in the educational portion I was a Governor of the Graduate Realtors Institute for many years.

My family came first and we became involved in Boy Scouts, 4-H and lots of school activities, especially wrestling and football. We were all active in the Episcopal Church of the Good Shepherd and I have served in all of the Lay Ministry positions of the church.

I joined the Rebekah Lodge where I was a regular member for nearly 50 years. In 1997-98 I was elected and served as the President of the Rebekah Assembly of Wyoming and traveled all over the state visiting Rebekah Lodges with my faithful traveling companion and chauffeur, Dick.

Retirement posed no problem for me. I sewed, made quilts to give away and I even wrote and published a book. I spent lots of time digging up family history and did four family history books. Because of my love of books I spent a lot of time reading. I served two terms on the Crook County Library Board and the library has played a big part in my life and the lives of my children.

One other love in my life has been music. I was able to learn to play the piano by ear at an early age and spent a lot of time playing for local house parties, dances, school doings and in later years entertaining at lodge functions and the nursing home. Always there has been music in my home and in my life.

Working in the yard, painting the house, what a joy to be able to do those things and stay busy. Busy people are happy people.

Sadness in my life came when both my parents were gone and I realized that I was then the older generation. Our entire family was devastated with the death of Dana Rae in an accident in 1972.

Now as my time here has come to an end, I would like to let my children and my husband know how very much I love them and how great it was to have all these years with them. To relatives and friends, thanks for being a part of my life also.

All is well! God Bless.

Rose Zella departed from this earth on Friday, March 6, 2020 surrounded by her loving family at the Campbell County Hospital in Gillette, Wyoming. As per her wishes, she was able to give a last gift as an organ donor (skin). 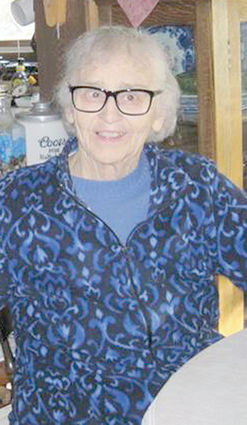 Services are scheduled for 2 p.m., Sunday, March 15 at the Fidler-Isburg Funeral Chapel in Sundance (viewing at 1 p.m.), followed by graveside services at Green Mountain Cemetery. All are invited to wear purple as that was Rose Zella’s favorite color. A reception will follow at the Church of the Good Shepherd Parish Hall.

Memorials have been established to the Crook County Library (Proctor Family Memorial) and the Church of the Good Shepherd.