This fall, Wyoming Superintendent of Public Instruction Jillian Balow issued an invitation to all girls in grades 7-12 to participate in an essay contest. She wanted to know what the future holds for Wyoming through the minds of youth by having them answer the prompt, How Will You Be Part of Wyoming’s History?

Faith Honey Anderson, a sophomore at Wyoming Virtual Academy, was the winner of the state contest. She was invited to Cheyenne on December 10 to participate in the Wyoming Women’s Suffrage Day celebration.

Anderson presented her essay in the beautifully decorated Capitol Rotunda to state legislators, officials and participants in the celebration. Her powerful message was about the alarming teen suicide rate that is increasing in the state and her mission to speak out as a teen advocate to end the stigma, tell others about available resources and instruct suicide prevention trainings in order to help reduce suicides. 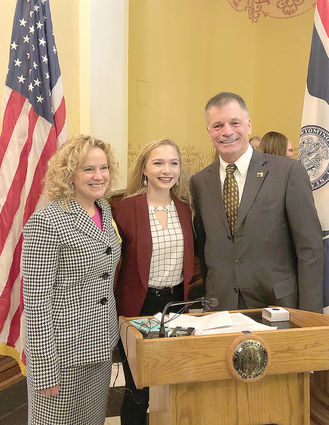 She challenged those in attendance to join her “in providing hope to the hopeless and a voice for those suffering in silence.” Anderson received a resounding round of applause after her concluding remarks of, “With your help Wyoming can again make history by eliminating suicides and encouraging our youth to choose life.”

Anderson stated this was an incredible experience. She was glad to have the opportunity to be able to raise awareness about such an important topic to elected officials.

Governor Gordon posted on social media that Anderson’s moving essay discussing Wyoming’s teen suicide rate and her commitment to making a difference was an inspiration to all in attendance.