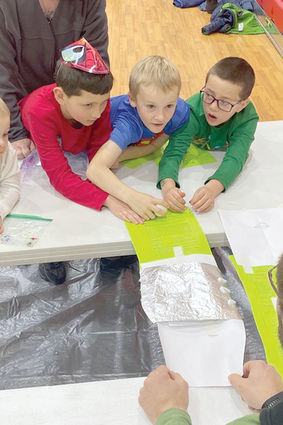 A crowd of kids and parents descended upon Sundance Elementary on Thursday to enjoy an opportunity for hands-on-learning and fun. Family STEAM Night was arranged by Ms. Abbie Love and Ms. Tina Inghram in honor of long-time teacher and Destination Imagination (DI) coach Ms. Tammy Needham.

“STEAM is an acronym for science, technology, engineering, art and math. We did stations that supported all of those areas and we also did some ‘instant challenges’ that are part of the DI program, which is what Ms. Needham was really involved in for the last 26 years she was here,” says Inghram.

“She was a coach for all those years and she supported all of those areas in Destination Imagination because that program does support higher level thinking skills in those areas.”

The action-packed evening was funded through an activity account fundraised by DI coaches and parents; Ms. Needham suggested the event would be a good use of the leftover money.

“She wanted it to be used by kids, but she thought maybe a family night would be a good use of those funds. We set that all up for her,” says Inghram.

“We wanted to honor Tammy Needham. Abbie and I are so grateful for everything she has done for kids and I know we have lots of families in this community that are grateful.”

The evening was open to all the elementary students and a few former DI kids from junior high and high school and DI parents also came to help out, she says.

“It was to support the kids here at the elementary,” she says.

Inghram counted 56 families in attendance. While it was tough to get an exact head count during the hustle and bustle, she estimates that between 175 and 200 people took advantage of the opportunity.

“We did serve a meal, too, that was free, and we gave out door prizes to 25 families,” she says.

The parents had the chance to go around the stations with their kids and get involved in the activities at each one.

“They had a lot of fun and it was a great opportunity to invite the families in to give them those experiences with their children,” she says.

“We didn’t have anybody who said they didn’t like it – everybody was happy.”

The stations included numerous challenges for the kids. 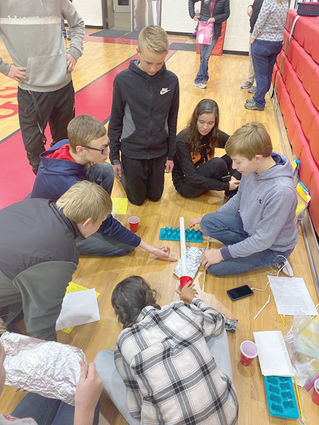 “We used all kinds of media and materials,” she says.

Activities included building a device that would move an egg between two tables without touching it; making a wallet out of duct tape (“Duct tape is huge in Destination Imagination,” Inghram laughs); creating a constellation that could be viewed through a toilet paper roll; building a picture with pattern block shapes; building geometric figures with mini marshmallows and spaghetti; building a terrarium; creating a mask; and more.

“I would love for us to be able to make it an annual event,” Inghram says. The goal would be to host Family STEAM Night each winter, perhaps in November, and give families more opportunities to learn and explore together.