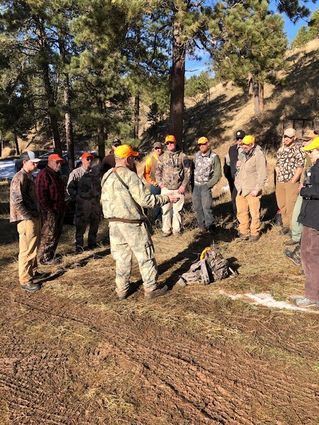 A 73-year-old hunter from Riverton got turned around in what he’d thought was a familiar part of Boundary Gulch last week. Thanks to the combined efforts of the Crook County Sheriff’s Office and Crook County Volunteer Search & Rescue, he was rescued and brought to safety.

When the hunter was finally located on November 19, he had managed to travel five miles from his starting point through treacherous terrain.

The hunter knew the area, having been to Crook County a number of times before. It was, in fact, his level of familiarity with the specific territory he’d disappeared in that made his hunting party fear the worst.

“They thought something catastrophic had happened, they thought he was dead or incapacitated,” says Sheriff Jeff Hodge. “The area they were hunting was…just a small point that they had been hunting for years and years. They’ve hunted the same area several times and done the same exact thing several times.”

The hunter and his three companions had been hunting around nine miles down Boundary Gulch road. Their plan, as usual, was to walk to the top of a ridge to the east, then walk another ridge back to the north, where they would be picked up.

Because he’d done the same thing a number of times before, the hunter’s party felt sure he couldn’t be lost and called the Sheriff’s Office for assistance. Deputy Alex Jessen met them at the spot where the hunt had been intended to end and gathered as much information as possible.

Jessen was able to locate the hunter’s tracks, but lost them again. It was almost 11 p.m. by this point.

“I made the decision to not carry on through the night because it was pretty temperate out there,” says Hodge.

Four deputies headed back up to the gulch at 6 a.m. along with five volunteers from Search & Rescue. A drone was flown along the ridge, but found no sign of the hunter. More tracks were then located heading east from the ridge had was supposed to have walked down – but there was another snag.

“There were actually two sets of tracks that were 99.9 percent identical, 30 yards from each other,” says Hodge.

Once the correct tracks had been identified, they could be followed for a while, but unfortunately once again were lost. Two of the deputies and one volunteer made a brave decision.

“Deputies Throckmorton and Moeller and LeRoy Curren decided to drop down into Bear Canyon, which is treacherous – it’s deep, steep and all there is is a creek down there. They found some tracks down there,” says Hodge.

“[The hunter] went down there on purpose – he was thinking it would bring him around. He was completely turned around.”

The tracks themselves were worrying, says the sheriff, particularly considering that the hunter did not have any survival gear on him when he disappeared.

“We found several places where he had fallen throughout the night. We were pretty concerned,” he says. “It was good that they found those tracks, so they could see, but we thought he had hypothermia because he was walking and falling. He walked all night long in that creek bottom – fortunately for him, it wasn’t super cold out that night.”

The hunter was located at around 11:20 a.m. He was in relatively good health, though exhausted and thirsty having walked through the night with no light, water or food; searchers found six places where he had fallen in the snow and three where he had broken through the ice into the creek.

Hodge commends volunteers Curren, Stephen Geis, Randy Gill, Jeff Mickle and Paul Holst for the excellent job they did to locate the hunter and Deputy Alex Jessen for his phenomenal work in organizing the foot search.

While Search & Rescue is not called in for every incident, their assistance can be invaluable, Hodge says. 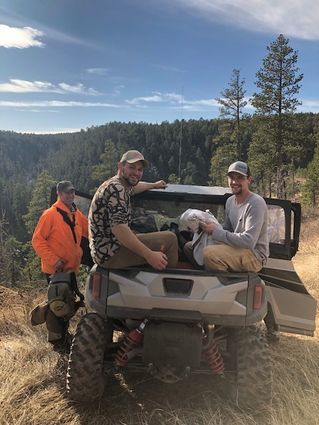 “We’ve had nine search and rescues this year already,” Hodge says. Most have occurred this hunting season, all have been conducted by the Sheriff’s Office, most have continued through the night and all have been successful.

“Once we know we are going to go into the next day is when we start calling the volunteers,” he says. The volunteers can at that point bolster numbers and allow deputies to rest or attend to other duties.

Should you be interested in volunteering for this crucial service, the sheriff would like to hear from you.

“We had a Search & Rescue training a couple of weeks ago and we had a really good turnout at Reuter Campground. Anybody interested in being on the volunteer Search & Rescue should get on the county’s website,” he says.