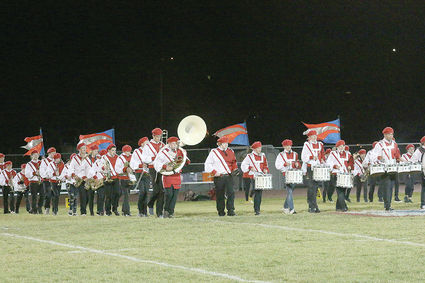 Homecoming week in Sundance pitted the #3 US Patriots against the Wright Panthers on a blustery Friday night.

After a 30-minute lightening delay, the Patriots started with the ball but were forced to punt it away on their first possession. The threatening Patriot defense came to the field ready to play, starting out with a strong sack on the Panther quarterback on first play.

The Patriot defense continued to come on strong as they were able to block the punt and Jayden Caylor picked it up for a 40-yard run for the touchdown, putting the patriots up 7-0 with 6:42 left in the first.

As the first quarter rolled on, the Panther offense continued to struggle as they punted the ball away again. With a high punt, the Patriots took a non-return and start at the 28-yard line.

With the offense on the field, two quick plays and the Patriots put up their first first-down of the game with 3:33 left in the first quarter. Unfortunately, an offensive pass interference made it a first and 25 for the Patriots.

After another good push up the field, the Patriots were able to get themselves in a third and long situation, calling a timeout with 1:59 left in the quarter. A defensive pass interference gave the US-Patriot drive a new life as the quarter came to a close.

The second quarter saw some trickery by the Upton-Sundance Patriots as they faked the punt and were able to move the ball down to 15-yard line. On the next play, Caylor swept left, and with plenty of lead blockers, was able to run it in for a touchdown, increasing the score to 13-0 with 8:40 left in the half.

While the Panthers were fooled, they were also determined to make a drive of their own. As the wind picked up, so did the Panther offense. Making a steady drive downfield, a Patriot penalty helped to keep the Panther drive alive until the 2:19 mark, when the Panthers fumbled the ball and the Patriots defense was able to get on top of it, taking control to end the half.

Their first drive ended in a punt attempt but a bad snap over the head of the Panther punter gave the Patriots a first and goal on the five-yard line. Sitting in good field position, a Patriot fumble on first down and a delay of game penalty pushed them back to the 15-yard line.

A gain of five on second down made it third and goal, followed by a no gain on the next play, put the Patriots to fourth down. Facing the fourth down, Patriot running back, Jayden Caylor took the ball up the middle but went nowhere, he then pitched it back to quarterback Brad Kruger who took it into the end zone for another Patriot touchdown.

Reece Barritt added another extra point and increased the Patriot lead 21-0 with 4:51 left in the third.

While the Panthers tried to make the best of the second kickoff, they were still playing into the wind. A first down and several more plays were unable to get them out of the quarter or the wind but a Patriot fumble on the punt return gave the Panthers the ball and another play to end the third quarter.

The fourth quarter finally let the Wright Panthers have the wind at their backs and try to air it out. Unfortunately, the pass was overthrown and brought up a fourth down.

With a quarterback keeper on fourth down, the Panthers were able to get a fresh set of downs and move up to the Patriot 29. The Patriot defense continued to hold strong and forced the Panthers to turn the ball over on downs.

Although the Patriots now had to face the wind in the fourth quarter, they also held the lead. Quarterback Brad Kruger pushed the ball to the 45-yard line for their first down.

Having a tough time getting their offense going against a stout Panther defense, the Patriots called a timeout with 5:45 left in the fourth. Wanting to keep the clock rolling, Kruger pushed the ball up the middle for another first down.

On the move now, the Patriots looked to pass to Kye Taylor, bringing them to their own 20-yard line. Racing against the clock, another pass from Kruger to Taylor put them at the five-yard line and a run from Caylor got the Patriots to the two-yard line.

Facing a fourth and goal, Kruger was able to find Brayden Bruce in the end zone for another Patriot touchdown. Tack on another extra point and the score moved to 28-0 in favor of the Patriots.

While the Panthers tried to make a push towards the end zone with less than a minute left, the stellar Patriot defense continued to shut them down, ending the game with a score of 28-0 in favor of the Patriots.

The Upton-Sundance Patriots move to 5-1 on the season and 3-1 in the conference. They will travel to Southeast on Friday to face the 4-1 Cyclones on Friday.

Stats from the game: 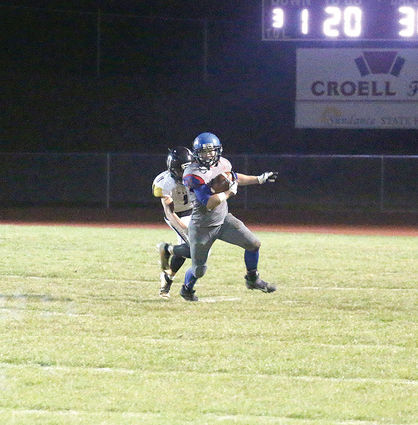