The Patriots opened up regular season play against the Lusk Tigers on Friday night and while lightning was in the forecast yet again, the only strikes close enough to cause problems were the Patriots in the end zone, early and often.

While the Lusk Tigers were able to move the ball within the first half, penalties continued to shut them down.

The third quarter opened with Jayden Caylor returning the ball and putting the Patriots in great field position yet again. Shortly thereafter, Taylor was striking again on a 10-yard run into the endzone.

Levi Rudloff was able to add an extra point making the score 31-0. As the Tigers took over, they made a big push down the field, scoring a touchdown of their own and running it in for two extra points.

Lusk had one more opportunity to score before the third quarter ended, but the Patriot defense was able to hold them just short of a much-needed first down, ending the quarter with a score of 31-8.

While much of the Patriot bench got to see the field in the fourth quarter, the Tigers were able to find the endzone one more time as quarterback Wyatt Stauffer connected with James Stone for a 13-yard reception, making the final score 31-14. 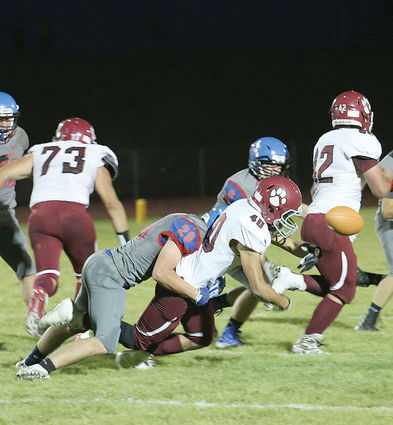 The Upton-Sundance Patriots move to a 2-0 record for the season, 1-0 in conference play. They will face off against the Wheatland Bulldogs in a non-conference game on Friday at 6pm in Sundance.

Stats from the Game