Paul T. Liamos hoped to top his father’s 94-year lifespan. Alas, he fell a few months short. He shuffled off his mortal coil at 6 a.m. on August 27, 2019 in the hospice unit at the Veterans Administration Medical Center, Cheyenne, Wyoming. Death was welcome; surcease of pain as well as the lingering loneliness, isolation and indignities inflicted by Alzheimer’s disease.

On December 10, 1925, he was born in Neihart, Montana, to Paul T. Liamos, Sr. and Lucille J. Erickson; he was their only child. For the most part and from a tender age, he was raised by his devoted father who was a somewhat peripatetic chef, but generally limited his wanderings to Northeast Wyoming and Western South Dakota.

Home for Paul came to be hotel rooms and homes of friends, mostly Greek, who helped raise him. Things stabilized in Newcastle, Wyoming, where he attended high school. He was a gifted student, good athlete and regular participant in student government and social affairs. Then came World War II.

Paul finished high school a year early so he could enlist in the Marine Corps at 17 years of age. Like most Marines, he was assigned to the Pacific theater.

For almost two years, he fought with the 4th Regiment of the 6th Marine Division. It was an island-hopping battlefield; three times he was in the first wave of Marine operations.

His last wartime posting was to Okinawa as part of the expeditionary force charged with establishing a stronghold from which an invasion of Japan could be launched. The campaign was a bloody one. As with so many other Marines, Paul (then 19) was shot in combat, for which he was awarded a Purple Heart.

By the time he recovered from his wounds the war was over and he became part of the occupying forces in Japan. Like other survivors of bloody battles, he quietly suffered the memories of lost comrades.

But some close lifetime friendships with Marine buddies transcended time and place. Though they were scattered about the United States, their reunions, correspondence and frequent conversations were a source of comfort and pride. Among the closest, “Scarbelly” Vana passed on March 29, 2016; “Hogleg” Barr on February 10, 2019. “Whitey” Liamos was left, alone.

Upon discharge from the military in 1946, Paul returned to Newcastle where, on August 26, 1947 (72 years and 1 day before his death), he married Wanda Boulden, a ranch girl he had known since the eighth grade. Shortly after they began their life together, Paul started his studies at the University of Wyoming, where he earned undergraduate and law degrees.

He practiced law in Newcastle and Cheyenne and eventually became a district judge in Northeast Wyoming. He was ambitious, enthusiastic and dedicated, with a prodigious work ethic. He routinely worked well into the night and almost all weekends.

When he wasn’t working at the courthouse, he was walking, for miles and miles, often carrying two large, heavy case folders. Over the years, he tried cases in almost every county in Wyoming.

He was often the “clean up” judge, disposing of aging cases allowed by others to linger on the docket. He finished his career in the law (at age 86) as the librarian for the Wyoming branch of the law library of the U.S. Court of Appeals, Tenth Circuit.

Paul was a gregarious, social person, a hale fellow, well met. But his friendly nature was genuine, never manipulative. He liked people and as some would say, “he never met a stranger.”

He was ever there with smile, a story, a joke, or words of encouragement and he was famously generous. He quietly contributed to many charities, public and private. His private charities were often forlorn individuals down on their luck; he would slip them money or help pay their bills.

He seemed unable to pass a person in need without offering help. And he was a notoriously extravagant tipper, especially to waitresses. Most of them at his favorite haunts knew and called him by name – “Judge” – and all were aware of his reputation for good natured, innocent teasing and lavish tipping.

It didn’t end there. He was a treat machine for every dog or cat that might come under his gaze and he regularly contributed to animal shelters. All in all, he was a good, kind man. 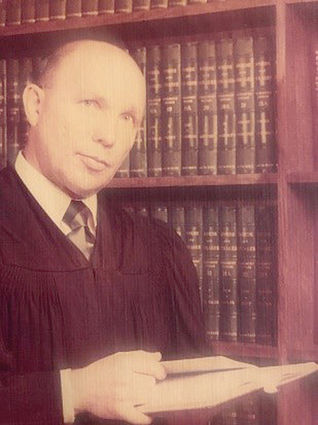 Paul had no siblings and outlived both his parents, collateral relatives and most of his close friends. His father passed on August 9, 1987 and is buried in the Black Hills National (Veterans) Cemetery at Sturgis, South Dakota. His mother Lucille J. Erickson Ryder passed on December 6, 1993. She is buried at the Mountain View Cemetery in Rapid City, South Dakota.

In lieu of flowers or donations, please leave a generous tip for a server (deserved or not), tell someone a joke, entertain a friend with a story or flash a smile to a stranger. In doing so, conjure the visage of a truly decent human being; one worthy of respect, even admiration: Paul T. Liamos.

Condolences may be offered to the family on-line at http://www.schradercares.com.