Nellie Marie Schneider, age 85, passed away on Monday, July 15, 2019 in Thornton, Colorado surrounded by her loving and devoted family. A memorial service was held on Monday, July 22, 2019 at Olinger Highland Mortuary in Thornton. Luncheon followed at Stonebrook Manor in Thornton.

From her birth in Hulett, Wyoming, on October 8, 1933, to her death on Monday, she shared her love with all of those around her. She was born on a ranch near Hulett to Kicker (Stephen) and Gladys Wood. Nell was the oldest daughter of 11 children.

Nell was very close to her daughters and their families and always taught them to love one another and respect each other. Nell spent a great deal of time with her grandchildren and great-grandchildren.

Each of her grandchildren would spend time with Nell and it was referred to as “Grandma’s Boot Camp”. This special one-on-one time is when Nell would teach them all about love and respect, to themselves and others. 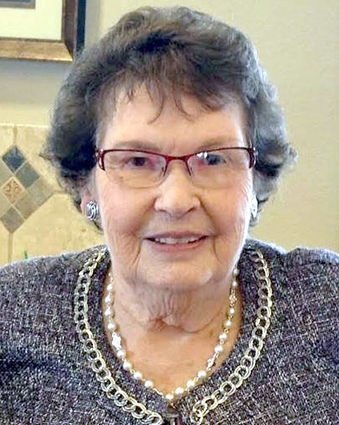 Nell attend a rural school from 1939-1947. She then graduated from Hulett High School in 1951. Also in 1951, Nell attended Black Hills Teachers College in Spearfish, South Dakota. She then went on to teach four children near Hulett during a teacher’s shortage.

In 1952, Nell attended Airline Training School in Omaha, Nebraska and then made her way to Denver, Colorado, to work for Frontier Airlines from 1952 to 1971. Nell’s knowledge of the communication operations allowed her to work for multiple companies throughout her career. Nell finally retired in 2009.

Nell never met a stranger and was always sending cards and notes by “snail’s mail” to all that she knew. She never missed a birthday, anniversary or thank you card. She loved to crochet and you never knew what you might find in Grandma’s crochet bag!