Naomi was the first born of 12 children, ten girls and two boys, to Clara V. (Everts) Hawley and George W. Hawley. Naomi would experience life in a sheep wagon traveling and living on sheep ranches with her parents in Butte County, South Dakota and Crook County, Wyoming, during the summers from 1925 to 1927.

From 1927 to 1953, the family lived on various farms including Blacktail Creek south of Hulett and Deer Creek area north of Hulett. Country schooling for the children required many children to pile onto the back of a horse or walk an average of two miles to school. Naomi received an eighth grade education at the Deer Creek School with Claudice Pearson as teacher.

Naomi often shared stories with her family and caregivers during the last three years of her life. The childhood memories were what remained in her memory due to Alzheimer's dementia. Hours were spent drinking tea and sharing stories of how fun it was to go to school activities, as well as sawmilling, or raising sheep and cattle.

Around 1942-1943, Naomi left Wyoming and traveled by bus from Belle Fourche, South Dakota, with all her possessions in one small suitcase, to Los Angeles, California, to stay with two aunts. There she began working to support the WWII war effort as so many American women did.

She got employment in a watch factory converted to making brass shells for the military. She described in detail why she quit after a few months.

She and a man were night workers stirring big vats of molten brass. They walked a gang plank above the vats stirring with large paddles, the size of a boat oar. Her co-worker fell in and dissolved. She thought the job was too dangerous, so she quit.

Her next challenge was to go to night school and study accounting and bookkeeping. By day she built her skills as a seamstress and tailor, guided by her aunts who created clothing for Hollywood actresses.

By 1946 she returned to Belle Fourche, SD to work as a nursing aide at John Burns Hospital. She met Robert "Mans" Terhune that spring. "Bob" worked as a mechanic at Hoseth Auto in Belle. They were married April 9, 1946 at the Methodist Church in Belle.

She and Bob moved to a ranch east of Alzada, Montana, that spring to work for Clinton and Barbara Hoffman. Bob did work building dikes and reservoirs with a CAT and Naomi cooked and did housework. By the following year she and Bob joined Bob's father, E.M. "Ted" Terhune running a sawmill operation in Wyoming about 12 miles south of Alzada.

The "Winter of'49" stories are in history books for snow depth and how damaging it was to livestock, barns, homes and people. So, in late April 1949, with new three-day old baby, Peggy, Naomi and Bob and Ted moved their sawmill to Alzada and set up a mill and planer operation southeast of the current Alzada school.

They moved their three-room home across the road east of the mill and began milling lumber to help re-build farm and ranch buildings and windbreaks for the area that had been damaged by the winter snow.

Naomi made a big garden and strawberry patch. She built onto their home seven more rooms with lumber from the mill and help from Bob and Ted.

Her interior wood was planed at their sawmill and with the help of Joe Nikodym from Alzada, who was a fine carpenter, she learned to finish several rooms with knotty pine and to build furniture for their new home. She had the job of cooking for 17 hired men every noon as well.

By June 27, 1952, Naomi and Bob had a son, Jack, to complete their family. Jack and Peggy attended Alzada's two room school until 1960. Grandpa Ted, who lived with them, became ill in 1959. Naomi cared for him until his death.

By 1960, with Ted's passing, Naomi and Bob chased their dream of having their own ranch and closed the sawmill and moved back to their roots in North Crook County. They purchased a small place on Deer Creek near where Bob's parents had homesteaded and where Naomi grew up. Naomi and Bob were still actively running their ranch until about 2008 and she was 83 years old and he was 86.

Dementia started its slow capture of Naomi's later life giving her, the family and Bob challenges to run the ranch and keep her comfortable and safe. She moved to Spearfish's Dorsett Home for professional care in February 2016 and Bob moved to Dorsett a year later. They resided there until October 2017.

Bob and Naomi moved to a private home in Spearfish in October of that year with professional caregivers, Comfort Keepers, to look after them. With the added help from daughter, Peggy and Naomi's sisters, Joan Anderson and Judy Keil, they were given home cooked meals, family visits and perfect end of life care at home.

Naomi and Bob were honored in August 2018 by Comfort Keepers International as "Family of the Year" along with 19 others in the US and their over-seas companies.

Naomi was very pleasant in spite of the developing dementia. After moving into her new home in Spearfish she began doing simple artwork projects at the table.

Her caregivers and doctors were impressed with the results. During September 2018, the Suzie Cappa Art Gallery in Rapid City featured her work in honor of the National Alzheimers Walk being held in Rapid City.

Bob passed away, August 22, 2018 and Naomi stayed on at her home in Spearfish until late May 2019. She returned to her ranch on Deer Creek to live. Once again, she had family, Jack and Linda, and the loving care of Healing Hearts Home Health caregivers.

Jack describes life working on the ranch with his mom, "Even a bad day was great, if I could work with Mom." A Comfort Keepers team described Naomi as "pure love." Sisters, Judy and Joan, expressed how glad they were to help and get to know their sister. They learned how respectful she was of life, Mother Nature, and people.

Daughter, Peggy, describes important life lessons were always taught by her mother. "A summer hailstorm tore Mom's garden to smithereens. After falling to her knees and sobbing, Mom returned to the house and gathered repair materials where we returned to the garden supporting everything. September came and produced a bumper crop." 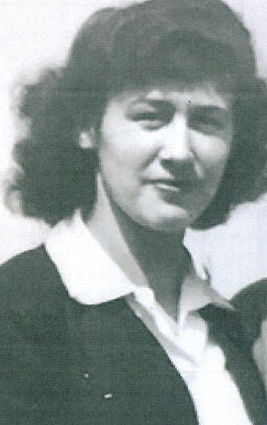 Naomi and Bob will have a private family memorial and burial at the ranch later. They previously had a Celebration of Life with family, friends, neighbors and caregivers at a gathering at their Spearfish home in August 2018 before Bob's passing.

We are so grateful to all who helped, supported and encouraged us through this time.

For an expanded obituary or for friends and family to sign her online guestbook and leave written condolences see blackhillsfuneralhome.com.