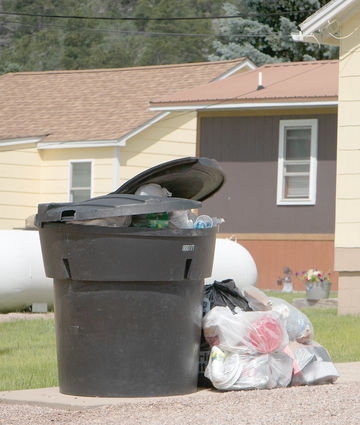 High volumes of garbage are being collected from around town this summer, the Sundance City Council heard on Tuesday. This is partly due to the Oneok pipeline construction currently taking place, which has brought a lot of activity and heavy usage from businesses such as the hotels and campgrounds.

Demand has been so high, said Clerk Treasurer Kathy Lenz, that CW Waste is performing two pick-ups per week just to keep up, while businesses are calling City Hall to request more trash cans.

This is problematic, said Lenz, because the contract with CW Waste specifies that the contractor will return money to the city if the weekly 16-ton limit is not met, but will also charge the city if it is exceeded. She asked the council to consider options to solve this issue, both at the current time and in the future.

The two suggestions Lenz made were for an “additional dumpster” fee in times of high demand and for a one-time high usage fee for July and August that could be charged right now. The former could be applied in the fall, when the council makes its yearly analysis of rates, while the latter could fix the problem occurring at this moment in time.

Council members agreed that a fixed fee for an additional dumpster would be an easy way to address the differences in usage between customers without disrupting the “fairly in-depth” rate schedule already in place. As explained by Lenz, the rate schedule charges restaurants by the tables, hotels by the room and so on.

Some quick math from Public Works Director Mac Erickson suggested that, based on the $34.90 base rate, it costs 36 cents per gallon per resident. With an “additional dumpster” fee in place, high usage customers could be asked to pay 36 cents per gallon for an additional can of a size that met their needs.

As the numbers were preliminary, department heads were asked to create a fee structure to present to the council for consideration.

At Tuesday’s regular meeting, the council also approved the mayor’s signature on a new agreement for the Crook County War Memorial. The previous draft had obligated the city to assisting with its care without naming the city as a party to the agreement, so City Attorney Mark Hughes worked with County Attorney Joe Baron to clean up the wording.

The city is now a party to the agreement and is committed to continue providing electricity for the lights. The city will not have responsibility for any other maintenance.

Lenz reported on the city’s efforts to upgrade recreational spaces, confirming that grants from the State Lands and Investments Board and Land and Water Conservation Fund will allow the construction of Central Park to move forward. Meanwhile, she said, the city has been awarded a grant to purchase two wireless speakers that will help visitors to downtown festivals better hear the announcers, while the “parklet” on the corner opposite the post office is proving popular and has received a lot of compliments.

Karla Greaser of Trihydro provided an update on the schedule for the project to replace a water tank in the canyon area. At present, she said, Trihydro is working through the easement process and is on track to bid the project in January to hopefully get some good prices early in the season.

The easement process should be complete by the end of July, she continued, and the 90 percent design by August to be submitted to the city and Wyoming Water Development. This will give the Department of Environmental Quality three months to review and finalize documents before bidding.

The council approved the minutes of the Land Use Planning Committee, though it was not possible to approve a request for the new Wagonwheel Subdivision. Due to a conflict of interest for Council Member Callie Hilty and the absence of Mayor Paul Brooks and Council Member Jana McLean, a quorum was not available to vote on the matter.

Finally, Hilty requested that Hughes write a letter to Range Communications to inform them that contractors installing fiber optics are removing the corners from properties and not putting them back, which could be costly for the property owner in the future if a survey is needed to replace them accurately.