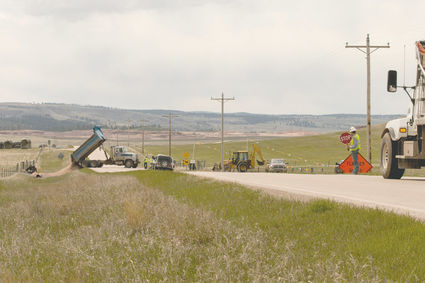 Contractors have launched the Crook County phase of Oneok's Elk Creek pipeline. Above, a crew works at a crossing on Moskee Road on Tuesday.

Oneok director of government relations Danette Welsh spoke with Crook County Commissioners last Wednesday, updating them on the progress of the Elk Creek Oil Pipeline that will be traveling through the eastern part of the county this summer.

The Elk Creek Pipeline construction is gathering momentum for the season and area residents are noticing. Welsh warns that residents will be seeing more congestion in the areas of construction, saying "You're seeing a little more traffic – a little more presence."

Dust is already a significant concern for residents living in the construction areas; Commissioner Jeanne Whalen said an individual had called her early Sunday morning to complain. Welsh's response was that the dust mitigation will be on the road, but not in the pastures where the digging will take place.

"It's construction and that's just part of it," she said.

With that clear, Crook County Road and Bridge Superintendent Morgan Ellsbury's crew will be spraying magnesium chloride onto the unpaved county roads this summer, but the contractor will be responsible for keeping water on the roads to mitigate dust until the county reaches those egresses.

The required fees due the county for the use of said roadways have been paid; however, contractor trucks have been using a portion of the county thoroughfare that had not been part of the anticipated route so an additional cost was forwarded to the contractor. According to Ellsbury, "He was there the next afternoon with a check."

Welsh had also spoken previously with Crook County Undersheriff Todd Leimser about any problems that may arise with the pipeline crews staying in area hotels and campgrounds during their work on the pipeline,

"Undersheriff Leimser will be sure to let me know if our folks start getting rowdy on the weekends," Welsh said.

As for sales tax for the county, Welsh assured the body, "All of the revenue is spread out by the state department by foot so you receive the sales tax on every foot of pipe that is put in Crook County." The commissioners expressed their relief at that clarification.

Finally, she informed the governing body that she had made tentative arrangements for the construction contractors to meet with Ellsbury on a frequent basis to better keep his department abreast of developments that may potentially affect local residents.

The group made arrangements to meet again in about a month for another update.