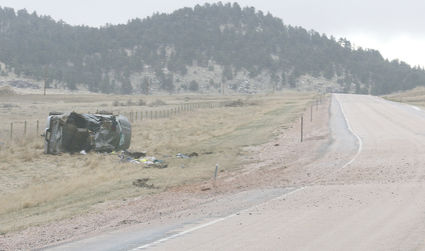 Of five crashes on Monday morning, only this one on Hwy 116 caused injuries – fortunately, both of them minor.

It may not have seemed particularly treacherous at first glance, but the deceptive conditions on the roads around Sundance hid patches of black ice that led to five separate vehicle accidents on Monday morning.

According to Lieutenant Tim Boumeester, Wyoming Highway Patrol, the crashes took place on I-90 both east and west of Sundance; on Highway 116 between Sundance and Upton; and on Highway 14 just outside of Sundance.

"It was all from black ice," he says.

Fortunately, none of the accidents resulted in serious injuries. The driver and passenger from the Highway 116 crash were transported...