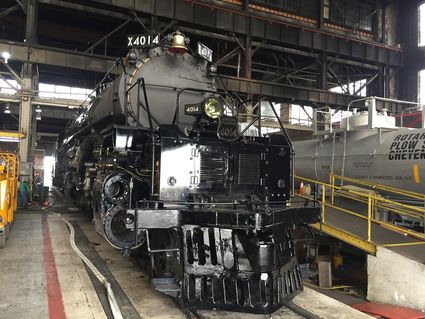 The Union Pacific's "Big Boy" – the largest steam locomotive ever made – is being readied for its first major trip in more than 50 years. The engine has been restored by members of the UP's Steam Division in Cheyenne and will leave Cheyenne for Ogden, Utah, on Saturday.

CHEYENNE - The story of Cheyenne is impossible to tell without also telling the story of the railroad. The tracks that cut through town are more than just the lifeblood of the country's economy; they were the genesis of Cheyenne's entire existence.

The railroad is just as synonymous with Cheyenne as the cowboy is, said Darren Rudloff, CEO of Visit Cheyenne.

"The railroad's history is an integral part of the Cheyenne mystique. Not just nationwide, but worldwide, as well," he said. "The name Cheyenne brings forth images of the Wild West and trains and steam engines, so it's part of our core....