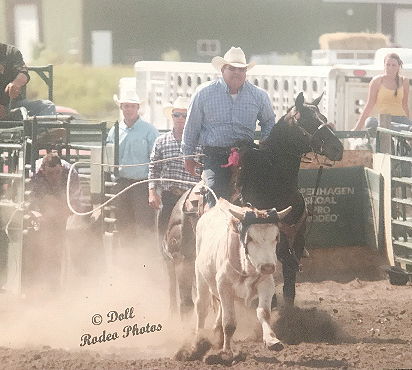 Robert Gene Burke was born January 31, 1951, and passed away at home on February 1, 2019, after a courageous battle with cancer.

Born in Belle Fourche, South Dakota, to William and Harriet (Alexander) Burke, he grew up on the 2U Ranch near Redig, South Dakota, along with his younger sister Jennifer. He attended grade school at the Dunn School and then went to high school in Spearfish, South Dakota, graduating in 1969.

While in high school Bob participated in football, basketball and rodeo. He was instrumental in starting the Lookout Riders rodeo club and competed in calf roping, steer wrestling and team roping.

After college, they returned to the Burke Ranch near Hoover, South Dakota in 1973. Bob ranched and continued to rodeo in the NRCA and SDRA circuits in all three of his events. His favorite event though was steer wrestling, and he also hazed for many other steer wrestlers. Kathy also ran barrels at this time and they have many happy memories of going to rodeos and being with the friends they made there.

In September of 1973, Bob was drafted and went to basic training at Ft. Leonard Wood in Missouri for the National Guard. He served with the Guards for six years.

On February 14, 1974 they welcomed their first born, Chad Robert, to the family, then Jason William on November 22, 1976 and Shannon Rae on August 10, 1978. The whole family worked on the ranch and also enjoyed going to the rodeos with Bob, enjoying many summer weekends among great friends.

While on the ranch at Hoover, Bob obtained his pilot's license and enjoyed time flying to check stock and water, hunt coyotes and occasionally startle a neighbor with a low flyover.

The summer of 1990, Bob, Kathy and family moved to the ranch south of Sundance, Wyoming, and have ranched there since. Bob worked for TriCounty Electric/Powder River Energy, retiring in February 2017.

Bob continued to rodeo after moving to Sundance, concentrating on the Old Men's Breakaway when he turned 50, winning multiple saddles in NRCA, SDRA, NDRA circuits.

Bob and Kathy were blessed with eight grandkids and enjoyed watching all of their various activities in and out of school. Bob especially had fun helping his grandkids and other kids with their rodeo events and horses.

He was involved in many organizations over the years, including rodeo association leadership and county fair board. When "someone" needed to do something, he was willing to be that someone. His great good humor and capable attitude made him the "go to" guy for anything that came along.

There was never a dull moment when Bob was around and he had fun everywhere he went. He and Kathy enjoyed dancing and could really "cut the rug".

He wasn't above playing practical jokes on anyone he knew and made a lot of people laugh over the years. He was also kind and compassionate and would help anyone in need, whether he knew them or not. He was a larger than life personality who will be greatly missed.

He was a beloved son-in-law to Bill and Wilma Swan, and a treasured member of the whole Swan family.

He was preceded in death by his father William Burke, his grandparents, and his in-laws Bill and Wilma Swan.

Funeral services will be Saturday, February 9, 11 a.m., at the Sundance High School Gymnasium, Sundance, Wyoming. Visitation will be a Cowboy Gathering and Sharing time at Kinkade's Funeral Home, Sturgis, South Dakota on Friday, February 8, from 5-7 p.m.